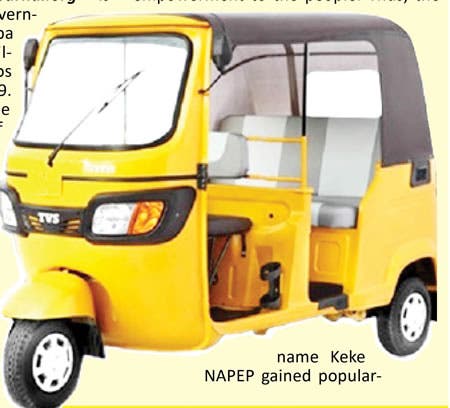 The history of keke as a means of commercial trans-portation in Nigeria, according to academicjournal.org is directly traced to the government of Mohammed Buba Marwa, who was the military Governor of Lagos State from 1996 to 1999.

He first launched the use of tricycle as a means of commercial transportation in Lagos. This led to the name Keke Marwa, which commercial tricycle is still referred to in Lagos and other parts of the country till date.

Why We Attacked Gov Ortom, We Failed Due To Slight…

We Had Peaceful Primaries In Lagelu, Hon. Kazeem Denies…

Equally, the word keke is directly derived from Yoruba, the dominant indigenous language in Lagos.

However, the popularity of keke across the nation can be attributed to National Poverty Eradication Programme NAPEP, which was inaugurated under the administration of President Olusegun Obasanjo to alleviate poverty and provide economic empowerment to the people. Thus, the name Keke NAPEP gained popularity across Nigeria.