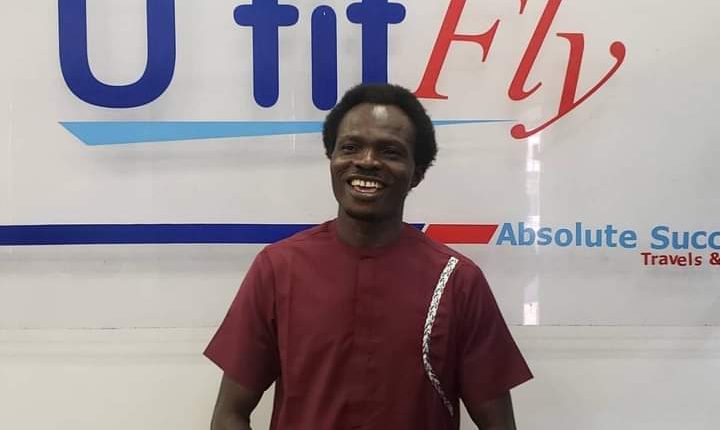 Dream came true for the Abeokuta born singer, Taiwo Adeboye, a.k.a Bèmbé Aladisa, 18 years after he released a song with which he prayed to be considered for a visa to travel abroad due to hard times.

Despite his popular track, ‘ẹyin oyinbo, e wa fún mi ni visa,’ which dominated the airwaves for many years as it went viral among the youth, Bembe Aladisa had waited for opportunity without any luck.

He was in tears as Ufitfly, a travels and tours company, announced an all-expense-paid-trip to Jordan for him.

During an interview with journalists at the Oluyole office of Ufitfly, he disclosed that he never travelled out of the country since he released the somg in 2003.

He said that he had earlier rescinded to faith and embraced farming before the opportunity came, stressing, “I was inspired to sing about the hardship in the country then. Unfortunately, I have never travelled out of this country since then. It was rumoured that the then Governor of Ogun State assisted me to get a visa and travel, but it was not true.”

The Team Leader of the company, Evangelist Ajibola Ogunkeyede, said his firm gave the artist a free all expense paid trip to the holy city of Jordan in April.

“All arrangements have been made to make Bembe Aladisa one of our Ambassadors that will lead other tourists to the Kingdom of Jordan. He’s going to have one room to himself. He will not share room with anyone and he will have the opportunity to shoot a short video at any point of attraction in Jordan.

“The man has been a good social crusader. We are going to arrange another trip for him to Europe and Asia.”