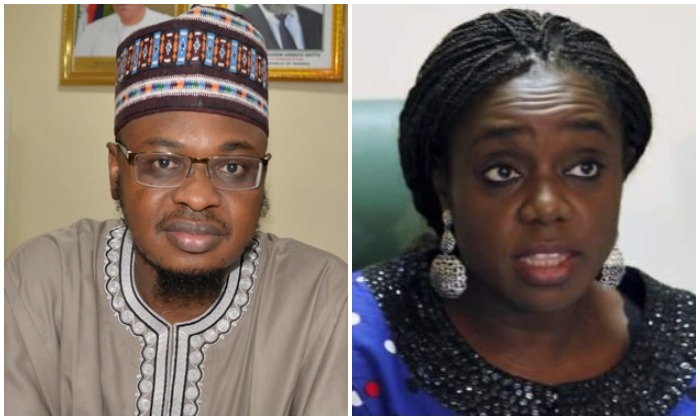 Following the outrage that greeted Abdulaziz’s story, Adeosun had resigned in September 2018 barely three years after her appointment by the President, Major General Muhammadu Buhari (retd.).

But the reporter took to Twitter on Thursday to defend the Minister of Communications and Digital Economy, Isa Pantami, over his alleged past relationship with terrorist groups.

The hashtags #PantamiResign and Kemi Adeosun have since been trending online having over 29,000 and 12,000 retweets respectively as of the time of filing this report.

Abdulaziz, who tweeted via @Abdulfagge, urged Nigerians not to judge Pantami by his past, a comment that Nigerian Twitterati has since linked to ethnic bias.

Abdulaziz wrote, “On @DrIsaPantami: Yes, public officers deserve all the scrutiny. But while we’re at it we’ve to be thorough, fair and nuanced. Yes, we can dig the past but passing judgment would have to alongside context and current realities. A lot of people have had a severed past. We all have a past. Not everyone will escape if our past actions and speeches are used against our present positions.”

Abdulaziz has, however, come under fire for his comment which many perceive as a defence for the communications minister who is also a northerner as himself.

Reacting, a tweep, @Chylife6 wrote, “The forged NYSC certificate of Kemi Adeosun was it not her past but you made sure she was sacked and replaced by a Fulani? Now you just remembered that we all have a past? You are a hypocrite.”

@FS_Yusuf_ wrote, “They want us to forgive and forget something more deadly than what they slew Kemi Adeosun for. We ain’t blind neither are we stupid. We see the hypocrisy, we see the selective activism and we will start acting accordingly. No one has monopoly for sentimentality. Let’s go rough.”

@ronaldnzimora accused the journalist of being paid to support Pantami after he exposed Adeosun.

“If Isa Pantami does not resign, then the resignation of Kemi Adeosun was a huge joke. What is sauce for the goose is sauce for the gander, except she was slaughtered on the altar of bigotry and ‘cabalisation’ of Nigerian politics. #PantamiResign” @AyoBankole submitted.

“Was it not you that did the exposé on Kemi Adeosun’s forged NYSC certificate which (rightly) forced her out of office? Now your brother is implicated in something FAR worse but we should let bygones be bygones?” @DavidHundeyin asked.

“I just woke up to some blog reports castigating @Abdulfagge for tearing Kemi Adeosun apart and overlooking Pantami. Although he’s capable of speaking for himself, this is a ridiculous profiling of his career. The same Abdulaziz who exposed Maina, a fellow Muslim and Northerner?” he asked.