Watch Young Woman Who Paints Cars For A Living In Ibadan, Says She Faced Challenges From Men (VIDEO) 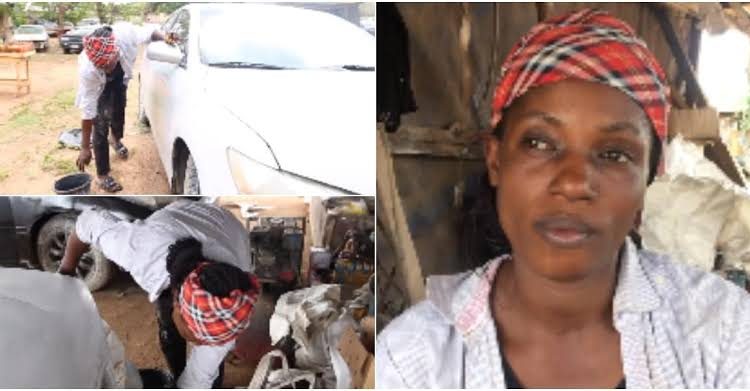 Modupe Olagunju who paints cars for a living said she learnt the work when she was in JSS 3 to please her mother.

According to the young woman, she faced challenges from men who usually want to date her before patronising her

The young lady said her shop was set ablaze due to jealousy and she had to relocate; she moved five times before she had rest of mind.

A young lady identified as Modupe Olagunju has shared how her mother urged her to learn car painting work and the challenges she faced on the job.

Speaking with BBC News Yoruba, the woman said she accepted to learn the job just to make her mother happy.

Modupe who is based in Oyo state said when she first started, most people made jest of her because of her kind of work while some encouraged her to put in her best.

“I usually have challenges from men who will insist on dating me before patronising me.”

According to the lady painter, her shop was razed down by fire due to jealousy from those who were envious of her success.

The mother of four kids called on women to learn a trade, saying they can always start small and expand.

“Save Your Money For TikTok Costumes” – Yomi Fabiyi Replies…

“Save Your Money For TikTok Costumes” – Yomi Fabiyi…