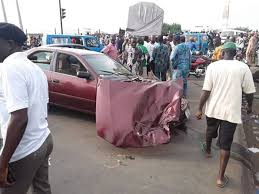 Two children and their mother have died in a fatal auto crash that happened in Ogbomoso, at the weekend.

It was gathered that the accident that claimed three lives occurred beside Crown FC hostel Ogbomoso Parapo, Oja tutun road.

An eyewitness said the auto crash involved a Sport Utility Vehicle marked LND 69 AR which skidded off the road and hit the deceased.

Both the mother and her children were said to be in a shop which is by the roadside where she sells plastics.

The Mistubishi SUV reportedly developed a mechanical problem while on motion and lost control.

Before help could come their way, all the three persons had died immediately they were hit by the car.

They were said to have died before being rushed to a nearby hospital.

The state police command could not be reached for confirmation as calls made to his phone did not connect.