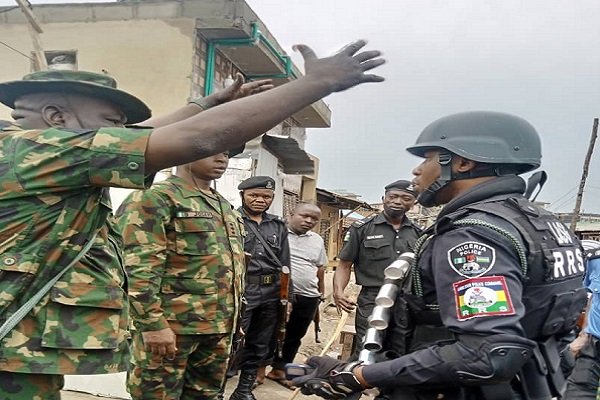 Oloyo, the police said, was stabbed to death by one Aliyu Shuaibu around 1am, which led to a reprisal by thugs loyal to him.

The Nation reports Thursday’s violence that saw hoodlums attacking motorists and commuters around the Mile 12 stretch of Ikorodu Road, was one of series of clashes recorded in the neighbourhood since last week.

Although the reason Oloyo was stabbed could not be ascertained, clashes linked to supremacy tussle among cult groups, ticketing issues in the market as well as a religious violence prompted by alleged blasphemy have been identified as reasons behind previous crises in the area.

Video clips shared on social media by witnesses showed residents and commuters fleeing the area for fear of being attacked.

It was gathered some of the hoodlums, who were wielding dangerous weapons, took opportunity to dispossess road users of their valuables and inflicted body injuries on a lot of people.

It was learnt it took the intervention of additional deployments of policemen and soldiers of Operation MESA to quell the unrest.

Narrating her experience, a witness, Tenibejiloju Aruwe said she escaped being mugged and robbed by the whiskers.

Reacting to the incident, the Police Command, in a statement confirmed Oloyo was killed but kept mute on the number of persons injured.

Spokesman for the command, Olumuyiwa Adejobi, said 48 suspects were arrested, adding the Commissioner of Police (CP) Hakeem Odumosu, has ordered 24-hour surveillance in the area.

Adejobi said the police’ preliminary investigation revealed that Shauibu stabbed Oloyo and the latter died before medical attention could reach him.

“As a result of the incident, some hoodlums, on reprisal attack, went on rampage and caused commotion in the area.

“On the strength of this development, the Commissioner of Police, Lagos State, CP Hakeem Odumosu, directed that additional men be deployed to the area to restore normalcy while 48 of them were arrest.

“The Police boss has ordered that the hoodlums should be made to face the full wrath of the law to serve as deterrent to others who might want to foment troubles in the state.

“CP Hakeem Odumosu has therefore affirmed that the command and other security agencies will adopt 24 hour patrol and surveillance in the area until the culprits involved in the crises are brought to book and total law and order restored in the entire area.

“The Commissioner of Police warned that the command will not tolerate any act of violence and lawlessness in any part of the state as all hands are on deck to suppress any criminal act within the ambit of the law,” he said.