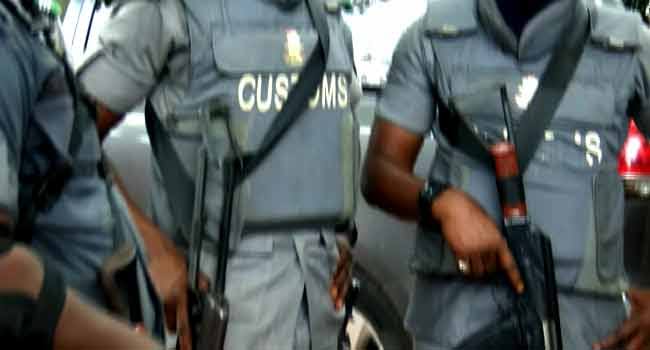 Two hoodlums were reported dead, many sustained varied degrees of injury, while one Taiye Kujo was arrested during an attack on officers of Ogun I Command, Customs Service, accompanied by military personnel on Thursday.

In a press release signed by the Command’s spokesperson, DSC Hammed Bukoye Oloyede, the incident resulted from an attack on the Customs’ patrol team by smugglers and cohorts.

He said that the “diehard smugglers aided by unscrupulous elements and hoodlums in their numbers and armed with sophisticated weapons shot and attacked the patrol team” to prevent evacuation of the contraband Three Hundred and Twenty (320) 50kg bags of foreign perboiled rice.

“Unfortunately, during the attack, four (4) Customs Operatives, one (1) Soldier and Five (5 civilians assisting in evacuation sustained gunshot injuries. They were immediately rushed to the hospital for proper medical attention and are currently responding to treatment.

“The Command’s Comptroller, Peter Kolo has appealed to the Traditional Rulers and community leaders to warn their subjects to desist from smuggling activities and attack on security operative as anyone caught shall be made to face the wrath of the law.”

Kolo also “assured the general public that the renewed hostilities by armed smugglers will not deter Officers and Men from discharging their statutory responsibility.”

LG Election: We Have No Hand In The Death Of Two Persons At Eruwa—Oyo/Osun Command…

Customs Confirms Clash Between Smugglers And Officers In Iseyin, Gives Reasons Why…