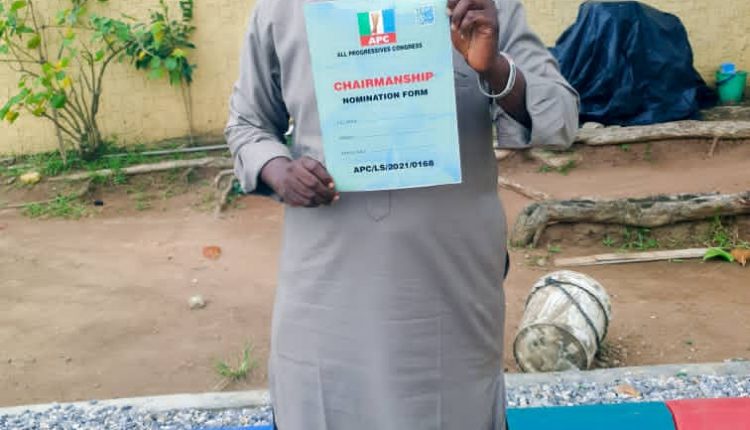 One of the pioneer members of the strongest APC political group (The Consolidated Group TCG) in Amuwo Odofin LGA founded by Com. Ayodele Adebowale Adewale, former chairman of Amuwo Odofin LGA in person of Com Segun. Solomon Adekoya has shown his interest in returning Amuwo Odofin LGA, Lagos to her glorious pedestal by collecting his nomination form for the chairmanship Position of the said LGA.

OBJ who had served the LGA as the head of Amuwo Odofin local government task force under the administration of Com. Ayo Adewale with various giant achievements like risking his life on different occasions to repudiate vandalization of oil pipes known as oil Pokery and illegal PMS dealings which was leading to the local government’s revenue sabotage, stoppage of bringing in unregistered containers/overnight bringing in of containers, worked hand in hand with the IGR unit of the LGA to boost the IGR of the council, clean environment that was devoid of unwarranted hawking, indiscriminate and undisciplined buying and selling on the streets and many more.

In the line of this duty of serving his local government, he was attacked on different occasions and hospitalised countless times, yet, he did not give up.

As an ideological comrade who finished from Lagos State University (LASU), he was attacked in a viral video where blood was gushing out of his head at the APC Secretariat in ACME road, Ogba, Lagos because he was advocating for pro masses’ policies undauntedly for his LGA.

Recall that Com. Segun Solomon Adekoya aka OBJ was also incarcerated for five days where he was tortured to the extent that it lead to the blockage of one of his ear’s drums.

Equally, this comrade was shot in 2007 during a pro masses protest on the street of Lagos by men of the uniform to the extent that the then Inspector General of Police, Mike Mbama Okiro had to intervene.

In his manifesto that he tagged EXPECTDUNEXPECTED, he said if he emerges, the local government allocation to education will be increased to 26% as suggested by UNESCO, Equipped health care delivery across the LGA maternities, payments of tokens to the Local Government Corpse members, sound public/private partnership, alliance with private, indigenous, para military Security outfit cum men of the police force for adequate security system, improving the IGR of the LGA by building car parks, buying waste trucks, establishment of more market systems, building Amuwo Odofin revenue mobile site,and applications, improving the electricity through rural electrification boards, construction of roads and many more will be done stressfully and convincingly.

As a believer in the school of thought of the late Gani Fawehinmi, Wole Soyinka, Anthony enahoro, Asiwaju Ahmed Bola Tinubu, Obafemi Awolowo, creating a positive society will be his utmost goal.

Let the Teachings of Ramadan Be Part of Your Daily Lives, Oyo CoS Urges Muslim Faithful