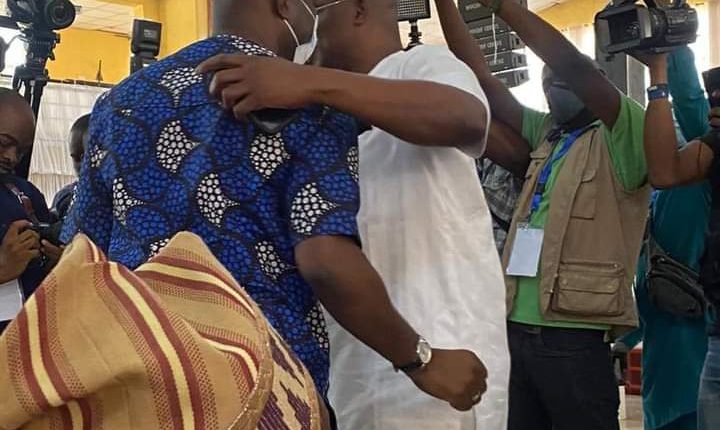 The new friendship between Former Ekiti State Governor, Fayose and the Governor of Oyo State, Governor Seyi Makinde will bring Progress to the Peoples Democratic Party PDP, in the Southwest.

It will be recalled that the two Leaders in the Party, were not in the past found it easy with each other, over who is going to take the mantle of Leadership in the zone, not until the recent Congress to select new set of leaders in the Party.

Ambassador Taofeek Arapaja that won the PDP zonal chairmanship portfolio of the PDP, belonged to the same faction with Governor Seyi Makinde.

In a nutshell, Governor Makinde is acknowledged the Leader of the faction that produced Ambassador Taofeek Arapaja as the chairman of the Party in the Southwest.

Meanwhile, Fayose’s faction endorsed the candidature of Eddy Olafeso who contested against Ambassador Taofeek Arapaja at the Congress.

It was no doubt clear that the outcome of the Congress that brought the Party Leaders together in all the states in the southwest.

Though, the conduct of the Congress was full of irregularities as observed and alleged by Fayose, at the end of the exercise, the two factions were able to settle between each other .

The recent development in the PDP southwest that brought Both Fayose and Governor Makinde together will bring Progress to the Party in the Forthcoming Polls at the zonal level.As All the Leaders in the Party have settled with one another in the Party.

Those Party Loyalists that belong to Fayose’s camp will work for the return of Governor Seyi Makinde and for Progress of the Party in Oyo State. The Party Leaders at the national level, most especially, The Saraki’s led reconciliatory committee has done wonderfully well to bring Peace back to the Party. Recalled that Saraki is the chairman Reconciliatory committee of the PDP who settled the rift among the aggrieved members of the Party.

APC Set To Whittle Down Powers Of National Chairman