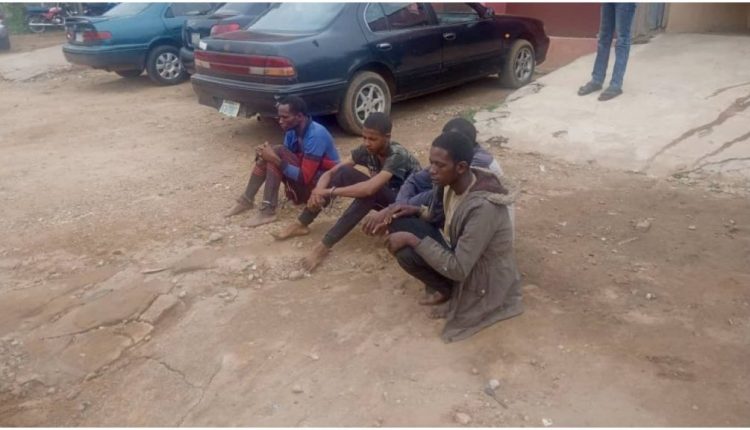 Four persons suspected to be kidnappers have been arrested in Akure, the Ondo State capital.

The kidnappers were apprehended by operatives of the State Security Network Agency also known as Amotekun Corps.

The security outfit said the suspects who operated within the Pelepe axis of Oda road during the weekend kidnapped three victims.

It was gathered that the kidnappers who missed their target, a businessman living within Oda road, decided to abduct the three victims who were taking shelter from the rain at a bus stop in the area.

When two of the victims were rescued, the kidnappers reportedly changed location and held on to the remaining victim demanding a ransom

Man Stabs Mother-in-law To Death In Ogun After Beating,…

OPINION: Baba Ijesha And The Limit Of Jokes

It was in the course of collecting ransom that one Usman Garuba was arrested by Amotekun operatives after which he led the Corps to his gang’s hideout where the remaining members were arrested.

Disclosing how he was introduced to the kidnapping, Usman said a man he called his master was the one who lured him after promising to give him a job.

“We miss our target. They told us the person has money and described the house but we didn’t meet the target. It was on our way back that we kidnapped these people. I came to Akure for a job”.

“I was introduced to one man who I followed to the first kidnap job. We kidnapped the man and three of us realized N100,000 from the job.”

The Commander of Amotekun in the state, Adetunji Adeleye disclosed that the suspects took advantage of the rainfall to execute the crime.

While stressing that the suspects will be handed over to the police for further investigation and prosecution, Adeleye stated the victims were rescued unhurt.