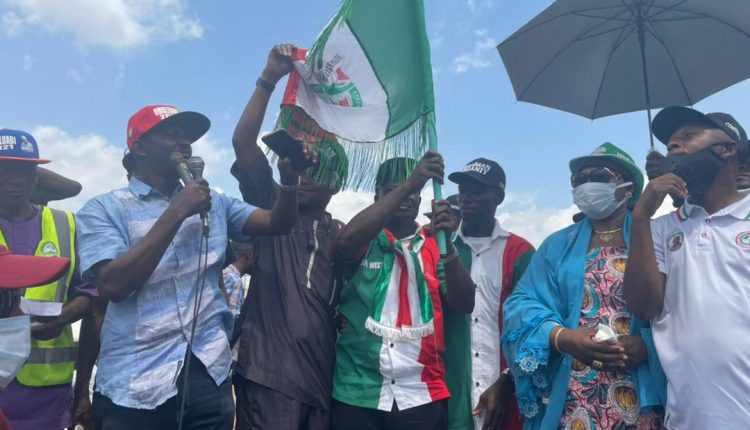 The Executive Governor of Oyo state, His Excellency Engr Seyi Makinde has been described as a silent achiever who always make the impossible possible and never shy away when it comes to facing challenges.

Making the assertion were the duo of PDP Chairmanship and Vice Chairmanship candidates for Ibadan North west LG in the forthcoming Local government election, Alh Abdulrahman Olanrewaju Adepoju and Alhaji Ganiy Abiodun Omotosho at the Ibadan Northwest/South west federal constituency campaign rally held at Molete Roundabout Ibadan where they were both presented with the flag of the party.

Alh Adepoju maintained that the mida touch of His Excellency on all sectors has added values to the lives of people of Oyo state. They further pledged to follow the leadership traits of the Governor in piloting the affairs of Ibadan Northwest LG when elected into the council.

The Chairmanship candidate, Alh Rahman Adepoju and his Vice, Alhaji Ganiy Abiodun Omotosho appreciated all the state party leaders, LG and ward Excos of Ibadan Northwest for gracing the occasion and for the trust they have in them as their candidates in the forthcoming election. They saluted their doggedness in moving the party forward.

In his remarks, the state party chairman Alh Kunmi Mustphar who was represented by the state party Secretary, Alh Wasiu Adeleke commended members from the two constituencies for their self discipline in their various wards and LG. He reiterated that the era of politics as a ditty game has gone. Politics as being practised by His Excellency, Engr Seyi Makinde is to connect people with the purpose of inspiring and empowering their lives.

While handling PDP flag, to the Chairmanship candidate and his Vice, Alh Adeleke urged them and the councilors to work in tandem with the policy of the party which is putting smiles on the faces of people. He urged all the party members from federal constituency to work hard as ever in ensuring that all the party candidates win the election.

The Chairmanship candidate and his vice congratulated all the muslim faithfuls on this year Eid el fitr celebration. They prayed that Almighty Allah will accept all their supplications during and after Ramadan as an act of ibadah.