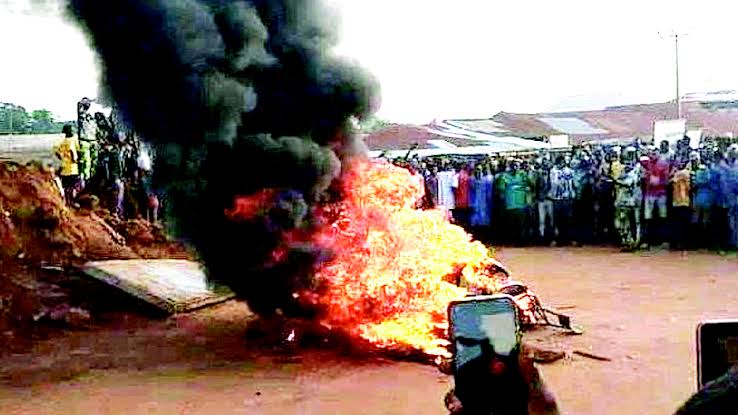 Police Public Relations Officer of the command, Mr. Bright Edafe, in a statement yesterday, said the trio were attacked by the mob while attempting to kidnap a victim at Oghara junction.

The statement read: “On the 10/5/2021 at about 1030hrs, information received that mob were attacking three kidnapping suspects who attempted to kidnap a victim whose identity was disclosed at Oghara Junction.

“Consequently, the divisional police officer Oghara division mobilized patrol teams and vigilante teams to the scene and rescued the three suspects which includes one Onome Efetobore ‘m’ a notorious criminal that has been in the police wanted list, Collins (surname unknown) also a known notorious kidnapper and armed robber who escaped from Benin correctional facility during end SARS protest and one Glory Reuben ‘m’ also a notorious criminal.

“They were seriously beaten, rushed to the hospital by the police where they were later confirmed dead at General Hospital Oghara.

Hon. Julian Nwachukwu Has Congratulated The Wife Of The…

“Exhibits recovered include a locally made pistol and three (3) live cartridges. The commissioner of Police wishes to advise members of the public to work with the police, and stay away from jungle justice.”

Similarly, the in the state command have rescued a kidnap victim, one Mr Jeffrey Emekume from the clutches of kidnappers along Eku/Abraka Road, Eku, Ethiope East Local Government Area.

Mr. Bright Edafe who also disclosed this in the statement said a Lexus Jeep sky blue with Reg. No. RSH 716 AX belonging to the victim was also recovered in the rescue operation.

“On the 8/5/2021 at about 2000hrs, information got to the divisional police officer Sapele Division CSP Harrison Nwabuisi that one Jeffrey Emekume ‘m’ 27yrs was kidnapped along Eku Abraka road Eku with his Lexus Jeep sky blue with Reg. No. RSH 716 AX makes a U-turn head to Sapele road.

“The DPO Sapele swiftly mobilized and led Crack Teams into the bush, The hoodlum who could not withstand the relentless effort of the police abandon the victim and fled.

“The kidnapped victim was rescued and the Lexus Jeep was recovered. The effort is ongoing to track and arrest the fleeing suspects,” the statement said.

Makinde Denies Interfering With Appointment Of Judges, Says I Only Ensure Due Process Was Followed To The Letter