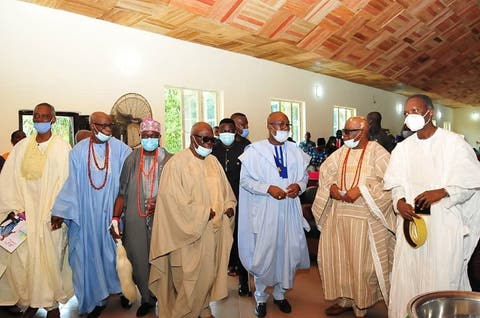 The Pan Yoruba socio-political group, Afenifere, on Tuesday reiterated the call for President Muhammadu Buhari to resign or step aside over his administration’s inability to address insecurity and the dwindling economic challenges confronting the country.

Speaking during the 95th birthday of the leader of the group and the dedication of a church in the honor of Chief Reuben Fasonrati, in Iju/Ita Ogbolu in Akure North Local Government Area of Ondo State, the Acting National leader, Chief Ayo Adebanjo, said the Buhari led government had incapacitated the country and had failed to address the increasing wave of insecurity and downturn of the economy.

Adebanjo said that with the series of challenges confronting the country, President Buhari ought to have resigned long ago without being forced to.

He said President had failed the people of the country saying there is no better time to leave but now, noting that Buhari’s government can no longer handle the situation.

What is he presiding over? Is it over corruption, security, education? Law and order have broken down in the country for the past three years. It is only because Nigerians are over tolerance of despots, that is why he is still there.

He lambasted the youth for failing the country and said “the younger generation has failed the country. The country was not as bad as this when we were demonstrating for self-governance.

“They want the old men to fight their cause for them. Why should people like me be in the trenches at 93 and Baba Fasoranti at 95. Where are those in their 40s and 30s.

“When we were at their age, we were in the street, at Lagos, London, everywhere and when we were in the university. What we have to say is jobbery where you can get somebody in the government to get you a job.

“You are PDP in the morning, APC in the afternoon and SDP in the evening, and they say they are young, the youth should be ashamed of themselves.”

He however expressed optimism that there is light at the end of the tunnel, saying “as a Christian, I still have hope. If Nigerians are conscious of their right, and they know what to do but where is the demonstration in the country that the Buhari government must go?

The Bishop of the Church of Nigeria, Anglican Communion, Rt. Revd. Simeon Borokini, described Fasonrati as a rare breed who has etched his mark in the sand of time.

I Was Promised Salesgirl Job In Ogun But Turned Into Sex…

Borokini said “We are here to celebrate teacher of teachers, mentor and leader, an educationist, a rare gift to Yoruba race and generation, a fighter, who has built a legacy that cannot be faulted”

According to him, Fasonrati has the courageous and upright personality that is missing in the country leadership saying Nigeria needs such a leader at this present time to forge a united country.

He noted that Fasoranti was never accused of corruption while he served as Commissioner of finance in Ondo state.

He said ” Baba never think Nigeria will generate to the level of what we are today. Insecurity, corruption are everywhere and those people that are supposed to take action against it are playing lips service to it.

This is a shame. However, there is still hope, all hope is not lost but we should be ready to love one another. We cannot continue like this, we should change our heart towards our fellow men. We must learn to forgive one another.

The heart of many had hardened with a hot iron, leadership has been detached from the people, many have deviated from the path of righteousness.

Nigeria is becoming a big joke to the people of the world, but there is hope, all is not lost. We must come to God in repentance and must be ready to do the right thing.

“We cannot continue like this as a nation but we must return to our creator for direction. We must learn to love all and let our hearts free of hatred.

“Peace can be returned to Nigeria if we do His ways just as He said in the Bible that in the world we shall overcome tribulation.”

The state governor, Mr. Rotimi Akeredolu, also described Fasoranti as one of the best assets of the Yoruba nation and a hero of democracy who should be celebrated.

Akeredolu who was represented by his deputy, Lucky Aiyedatiwa, said “we gather here today to celebrate one of the best from the Yoruba nation. His selfless service stands him out and he remains one of the heroes of democracy in the country today.

His presence is a symbolic asset to the Yoruba race. We should all stand to join him in his dream to bring about a united and strong Yoruba nation.