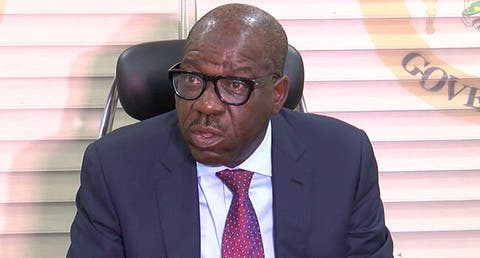 After months of denial, the cracks in the relationship of the Edo State chapter of the Peoples Democratic Party, PDP, and Governor Godwin Obaseki, widened on Tuesday as the party petitioned the national body in protest of an alleged plan to dissolve the entire party executives in the state.

The development is coming barely three weeks after the state chairman of the party, Tony Aziegbemi, said they were in talks with Governor Godwin Obaseki over the delay in constituting a state executive council, seven months after Obaseki was sworn in for a second term in office.

Obaseki, it would be recalled, became the adopted candidate of the PDP in the September 19, 2020 governorship election in the state having been disqualified to seek a second term by his former party, the All Progressive Congress (APC).

Sources close to the PDP in the state told the Nigerian Tribune that Obaseki had refused to constitute his cabinet, using the composition to negotiate for the dissolution of the PDP’s executive councils at all levels in the state so as to accommodate those who decamped from the APC with him to join his new party, the PDP.

A chieftain of APC, Hon. Charles Idahosa, who left the party because of the treatment measured to Obaseki, had told Tribune Online months ago that the decamped APC members and the original PDP members were meeting to streamline all the issues that the new political realignment had thrown up, assuring that there would not be any problem arriving at a workable arrangement.

In the strongly worded letter, addressed to the national chairman of the party, Prince Uche Secondus and endorsed by Tony Aziegbemi and the State Secretary of the party, Hillary Otsu, the party stated that the letter was part of the resolution passed in an Emergency and Expanded State Working Committee (SWC).

How We’ve Been Printing Money, But Swore Oath To Always Lie…

The party frowned at a purported state leaders meeting held at the Edo Government House on Saturday where it was allegedly resolved that the leadership of the party at all levels be dissolved.

The letter said that after over five hours of deliberation, “The expanded State Working Committee and local government chairmen of the Edo State PDP reject in its entirety, the proposal by the above-mentioned meeting to dissolve the legitimately elected executive committee members of the PDP at the ward, local government and state levels.”

They also alleged that the said meeting in government was called to ambush the state chairman of the party who was said to be in the minority with only three leaders of the party as against 10 who came with Governor Obaseki.

“We hereby reiterate to the National Executive Committee of our party that the issue of dissolution of executive committees in Edo State is ‘subjudice’ and it will be an act of contempt of court to revisit it by the party.

“The genesis of this looming crisis results from the acquiescence of the National Working Committee members who negotiated Godwin Obaseki’s movement to PDP, to reach a verbal or written agreement on the integration of the new members vis-a-vis the sharing of appointments, after the elections had been won”, the letter stated.

“We, therefore, condemn Gov Obaseki’s re-appointment of his former SSG without any consideration for the legacy PDP he joined. To this end, they have consistently sung a tune of “harmonization” ever since Obaseki was sworn in, knowing that he now has the “yam and the knife”. We have resolved strongly that if any harmonisation must take place, it must start from the Governor’s office, where his deputy governor should resign and a deputy nominated from the old PDP is sworn in. This can be a springboard for broad harmonisation across the state party organs,” the PDP leadership maintained.

They alleged that Governor Obaseki was being misled by three categories of people in the party which they identified as aspirants for 2023 and 2024 elections, members of the party who lost during the party’s congresses and godfathers that came with the governor from the APC to the PDP who they said have refused to register with the party in their wards.

“Wetin Them Talk Say I Do Again ?’ – Desmond Elliot Asks.