EXCLUSIVE: Tinubu Finally Opens Up On Ambode — Here’s How They Fell Out 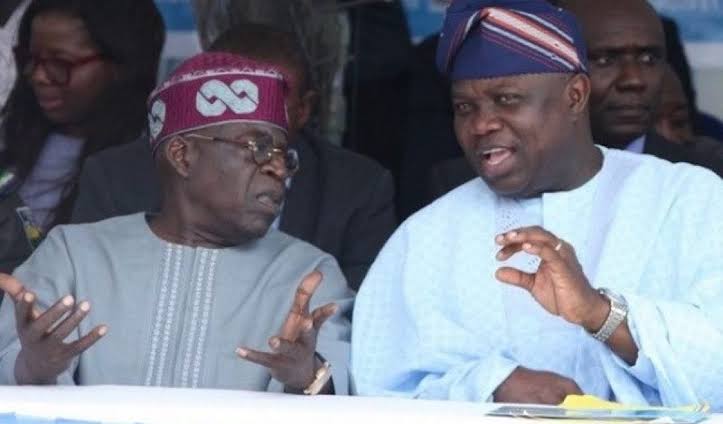 In April 2014, a year before the Lagos governorship election, TheCable published an exclusive story unveiling Akinwunmi Ambode as the next governor of the state.

That forecast was largely as a result of the political permutations that had favoured Ambode.

At the centre of the goodwill coming his way at the time was Bola Tinubu, former governor of the state and national leader of the All Progressives Congress (APC).

However, as his second term bid got more intense in 2018, it became obvious that he had fallen from grace and no longer in the good graces of Tinubu.

How did it happen?

OCTOBER 24, 2014: DECLARED INTEREST TO GOVERN LAGOS
Long before the Lagos APC governorship primary on December 4, not many knew Ambode except for his portfolio as the accountant-general of the state under the Babatunde Fashola administration and permanent secretary at the ministry of finance under Tinubu.

But by the time he declared his governorship bid on October 24, 2014, he was widely being referred to as “the man who has the backing of Tinubu” — and that was all he needed to launch a bid to take over from Fashola.

DECEMBER 5, 2014: BACKED BY TINUBU
With the backing of the APC leader, Ambode easily cruised to victory at the APC governorship primary, defeating much more popular candidates, including a serving senator and the speaker of the state house of assembly.

He had polled 3,735 votes in the election, pushing the senator and the speaker to a distant third and fourth.

JULY 4, 2017: DUMPED PSP OPERATORS
One of the earliest signs that Ambode was stepping on the toes of some powerful persons in the state came in July 2017, when he contracted Visionscape, an environmental utility company, for waste management services in the state.

The contract had put the Lagos private sector partnership (PSP) operators in charge of refuse collection and disposal out of business. The big deal at the time, though, was that those in charge of PSP operations were mostly influential persons at the grassroots, who make up a core part of the APC structure in the state.

The state assembly would later overrule Ambode on the issue and, in October 2018, ordered the PSP operators across the state to resume work.

THE SECOND TERM BID
As the 2019 governorship election drew nearer, it became clear that Ambode was no longer in the good books of Tinubu.

This, many believed, was mainly because of allegations that he abandoned the party structure put in place by Tinubu and even dumped some loyalists of the APC leader.

SEPTEMBER 11, 2018: COUNCIL CHAIRMEN ABANDON HIM FOR SANWO-OLU
As Ambode continued to fight for his political life, the 57 council chairmen in Lagos state abandoned him and pledged support to Sanwo-Olu who at the time had reportedly been anointed by Tinubu.

It Hurts When Oriyomi Hamzat Criticizes Me,…

“Meeting is over. Ambode is out. Jide Sanwo-Olu is the new governor of Lagos. All 57 local government chairman have signed his form. It’s over,” one of the insiders privy to the development had told TheCable.

SEPTEMBER 14, 2018: NOT EVEN THE INTERVENTION OF OSINBAJO, OSHIOMHOLE COULD HELP
As his goodwill among political actors in the state continued to diminish with each passing day, the APC leadership was said to have intervened to get Tinubu to “forgive” Ambode.

On the instruction of President Muhammadu Buhari, Vice-President Yemi Osinbajo and Adams Oshiomhole, then-national chairman of the party, reportedly met with Tinubu to make a case for Ambode to no avail.

SEPTEMBER 30, 2018: THAT PRESS CONFERENCE
What is regarded as the last straw that shattered what’s left of Tinubu’s goodwill for Ambode was a press conference the latter organised as he battled to secure the governorship ticket.

At the briefing which he called a day to the party’s primaries, he had alleged that Sanwo-Olu was once detained for spending fake dollars at a nightclub in the US, among other damning claims.

“The aspirant being put up to compete against us is not a fit and proper person to take this job. This is somebody that has gone for rehabilitation before. The records are there at the Gbagada General Hospital,” he had said, before urging Tinubu and other APC leaders to “have a rethink.”

SEPTEMBER 30, 2018: TINUBU OPENLY CRITICISED AMBODE
Hours after the briefing, Tinubu released a statement in which he chided Ambode and accused him of departing from the state’s masterplan.

“Whenever a government departed from this plan without a compelling reason, the state and its people have borne the painful consequence of the improper departure,” he had said.

JANUARY 28, 2019: NARROWLY ESCAPED IMPEACHMENT
Just as the state governorship election was drawing near, the aftermath of Ambode’s frosty relationship with Tinubu spilt over to the state house of assembly where most of the lawmakers are staunch loyalists of the APC leader.

On January 28, they began a move to impeach him, after accusing him of incurring expenditure from the 2019 budget without presenting it to the assembly. However, he was said to have been saved by the intervention of party leaders at the national level.

‘WRONG DIRECTION’
On Friday, almost two years after Ambode lost his second term bid, Tinubu opened up on why he abandoned him for Sanwo-Olu.

Speaking at the inauguration of the Agege Pen-Cinema Bridge in Lagos, the APC leader said “the ship of this state seems to have headed in a very wrong direction” under Ambode but Sanwo-Olu “turned it round to the right direction”.

Interestingly, in 2017, a year before all they fell out, he had praised Ambode thus: “Today, I can see your report card, you have scored well, and you have shown prudency especially in the judicious use of resources of the State. You didn’t disappoint us. Ambode is silently achieving, meticulously planning, religiously executing and brilliantly giving results for Lagos State.”

Indeed, most Lagosians can agree that in the state, the fear of Tinubu — whom the Financial Times once referred to as a political Svengali, the all-controlling character in George du Maurier’s 1891 gothic-horror novel — is the beginning of wisdom.