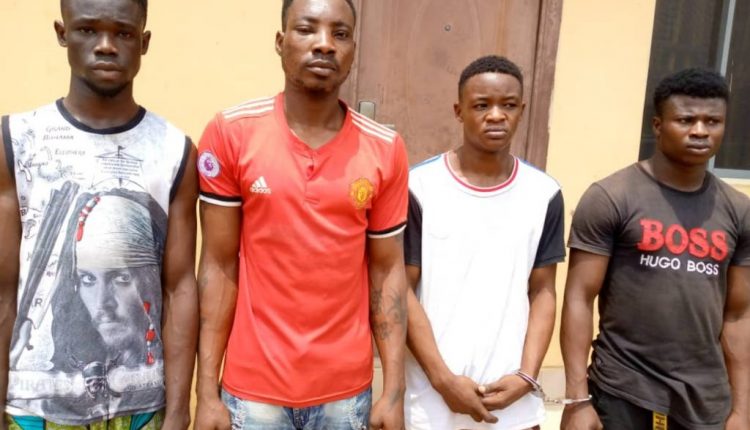 The four suspects were identified by the police as; 21-year-old John Nelson, 29-year-old Adeleke Ayotunde, 20-year-old Adekunle Basit and Abey Fagbemi, who is 20.

TODAY SPLASH learnt that their arrest followed a complaint lodged by one Adejunwon Odunowo at Onipanu police station.

Odunowo had told the police that his daughter, Susan Odunowo, was sent on an errand by her mum at about 6:30 pm on Thursday, but she did not return.

The father stated that received an anonymous phone call, demanding for a ransom of N500,000.

“I Was Offered N100m To Indict Davido Over Tagbo’s Death,…

The Ogun State Police Public Relations Officer, Abimbola Oyeyemi, told TODAY SPLASH that the DPO of Onipanu, CSP Bamidele Job, wasted no time as he detailed his crack detectives to go after those behind the devilish act.

In a statement on Tuesday, Abimbola said the detectives, on Saturday, successfully traced one of the suspects to Cele area of Ota and got him arrested.

This, TODAY SPLASH learnt, led to the arrest of two other members of the gang at a factory in Ota.

“It was then discovered that the victim was being kept in a room, owned by Adekunle Basit. Detectives swiftly moved in there, and rescued the victim unhurt,” he said.

One Abbey Fagbemi, who was said to have earlier fled when he heard the arrest of his accomplices, was later arrested at about 7:30 am yesterday, Oyeyemi disclosed, adding that the “victim has since been reunited with her family.”