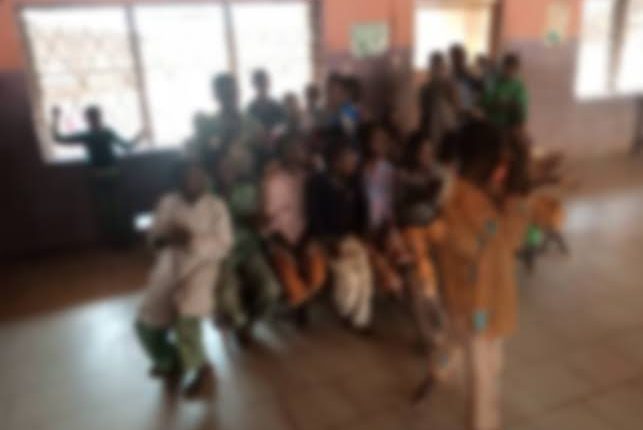 The twin gate shielding the vast compound from the main road was locked; as it always is. After a brief knock, an elderly security man peeped through an opening in the gate. He demanded sternly for my mission. Instantly, I realised that entry into the Ibadan-based Oyo Juvenile Correctional Institution is strictly prohibited unless with a genuine reason for visiting.

After inquiring about the process of donating gift items to the home, I was allowed in by the security guard. Before entering the administrative building, I observed how well kept the premises was; the lawn was recently mowed and despite the presence of trees surrounding the compound, the ground was not littered with fallen leaves.

Beside the building was a group of children being given instructions by a staff. They were clad in oversized and worn-out clothes and some of them had no shoes on. Their appearance was a sharp contrast with the neat exterior of the premises. It was also an indication that beyond the big brown gate lies potentially unpalatable sights.

While inside, that was the case. Most of the children appeared malnourished, in need of medical assistance, and some of them had bruises on their bodies.

Foodstuff shortage was a major challenge facing the home, the staff on duty said.

“Some people donate toiletries but we don’t really need them. The children cannot eat toilet rolls. We need enough to feed 180 children, morning, day and night and not toilet rolls,” she said.

“We are not saying the toiletries that are donated are useless but we need foodstuff. Someone recently donated two bags of rice. We still need rice, we need beans. We also need baby food; all kinds of them.

“We need drugs. Some of the children are defecating now. Even I have become a doctor here. We don’t have doctors.”

A Red Cross official who once worked at the home, and who wished to remain anonymous, said one of the major problems of the institution is inadequate medical facilities.

She said: “I visited the institution a few times, once as a Red Cross official. We were visiting several institutions such as this to carry out check-ups on the children. And then sometimes as a psychiatric student under University College Hospital to help treat the children.

“I noticed that several of the children were not neat. Some wore just shirts with several buttons missing. Also, there were some children with cerebral palsy with saliva dropping from their mouths and the officials were just using the children’s dirty clothes to clean the saliva.

“I noticed that the children also had emotional problems. They could be depressed or afraid. We helped to treat most of them.

JUST IN: PDP Appoints Sen Ningi To Heads Electoral And…

“There were also babies with hydrocephalus in addition to the children with cerebral palsy. The home did not have money for their drugs. The resident doctors in UCH visited using their own money at the time.”

The Red Cross official also said most of the children are not enrolled in school.

‘GOVERNMENT CANNOT DO IT ALONE’

When confronted with the challenges of the correctional institution, Adebayo Raji, principal officer, social welfare department at the ministry of women affairs in Oyo, said there is a limit to what the state government can do.

He said that although the government takes care of the children’s wellbeing, there is a window for private individuals and religious bodies to assist the home.

He said: “Government takes care of everything but the government cannot do it alone. We take care of feeding and clothing because the children wear uniforms.”

When told that the children were not wearing uniforms when TheCable visited the home, Raji said the government has made it a policy to ensure children have uniforms.

“They may not have worn uniforms but the government provides uniforms for them,” he said.

Raji also insisted that the children are enrolled in public schools — but that they must spend a certain number of months at the institution before that happens.

“When the children have spent about seven months with the institution, we enroll them in nearby schools. You will see them in school uniforms if you go there when school is in session,” he said.

“The children are of three categories. The first are juvenile offenders who cannot be sent to prison because of their age. They are children who are 17 years old and below. The second category is for children beyond parental control. These children are referred to the home by their parents due to their offences. The third category encompasses children on the streets; those in need of care and protection. We protect them until we can locate their parents.”

Addressing the issue of inadequate healthcare at the home, Raji said a matron is always present and that serious cases are transferred to government hospitals.

He said: “They do not have (medical) equipment but if there is any serious case, the senior matron may refer to the hospital. They send them to the nearest hospital or whichever hospital depending on the gravity of the situation.”

Editor’s note: The children’s faces were blurred to protect their identities.