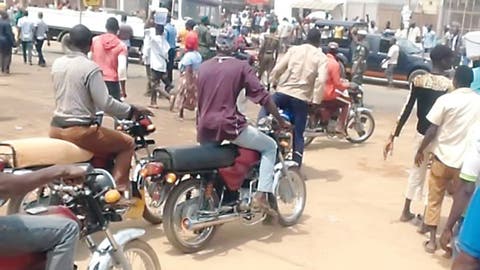 •Residents are united against okada —Commissioner

As residents wait with bated breath, DAYO AYEYEMI writes on the proposed ban of okada operation in Lagos.

THE Lagos State government is expected to launch a new transportation policy on Tuesday, with the governor, Mr Babajide Sanwo-Olu, making a big announcement on okada operation in the state.

If he decides on a statewide ban, the direction in which everything is pointing is expected to follow in days ahead, with serious socio-economic and even political implications and consequences.

In an interview, the state Commissioner for Information and Strategy, Mr Gbenga Omotoso, gave hints to know that it is already morning for okada riders in the state who, over the time, had become notorious for deadly mob actions, jungle justice and societal nuisance. (see interview below)

According to findings, the state government will be rolling out the first 500 First and Last Mile buses same day to ply the routes currently open to okada.

An official of the state Ministry of Transportation told Saturday Tribune that no okada must henceforth be sighted in the Lagos metropolis after the launch, adding that the scheme signifies a total eradication of commercial motorcycle operation in the state. More than 300 okada have been reportedly impounded by the state authorities in the last three weeks in preparation for the new scheme. According to the source, “as more buses are rolled out across routes in Lagos, that means okada is gone forever.”

Asked if the government is planning to engage some of the okada operators in the new initiative, the source said they were not part of the programme, adding that before now, they were asked to form themselves into cooperative under the National Union of the Road Transport Workers (NURTW) to see other initiatives of the Lagos Metropolitan Area Transport Authority (LAMATA) they could key into but they allegedly refused.

It is estimated no fewer than 400,000 okada ply Lagos’ roads on a daily basis.

Spokesperson of LAMATA, Mr Kolawole Ojelabi, said more information about the new busses replacing okada on Lagos routes would be communicated by the time Governor Sanwo-Olu launches the initiative on Tuesday. Although this is not the first time the state authorities would be pronouncing ban on okada in the metropolis, it is the first time an immediate alternative is being provided.

Tolerated for too long?

In 2012, former Governor Babatunde Fashola signed into law, the Lagos Road Traffic Law 2012, which restricts okada operation in at least 492 of the 9,200 roads across the metropolis.Today, the okada operators have returned to all the roads they were banned from with ferocious impunity.

The law spells out the offences and punishments attached. For example, commercial motorcycle operators are not to ply major trunks such as Ikorodu Road, Funsho Williams Avenue, Apapa-Oshodi Express, Lagos-Badagry and Lekki-Epe expressways, including all routes in Ikeja.

Specifically, Section 3 (1) of the traffic law prohibits the riding, driving or propelling of a cart, wheel barrow, motorcycle or tricycle on the major highways in Lagos.

Former Governor Fashola also lamented the rampant cases of accidents caused by okada. Records show in 2012 that Lagos alone had 2,555 accidents within five months, out of which okada accounted for 1,762 or 69 per cent. The National Orthopaedic Hospital, Igbobi, has a ward that his dedicated to okada accident victims.

One of the spokespersons of the Lagos Task Force on Environmental and Special Offences Enforcement Unit, who did not want his name in print, stated that between January and April, 3,503 okada were impounded by the agency, with more than 300 seized in the last three weeks.

He said: “Three days ago, 92 motorcycles were impounded around Jakande/Ejigbo axis. Eighty-two okada were impounded at the same location two weeks ago. Some of these okada riders don’t obey traffic rules; they go on one-way and insult motorists and officers on duty. Besides, there are lots of infiltrations among them; no regulation, anybody can wake up and ride okada to perpetrate crime.”

According to him, these impounded motorcycles, based on state government’s policy, would be taken to where they would be crushed.

Decrying the perceived untoward attitude of okada riders, an online publisher, Mr Gabriel Akinnadewo, on his Facebook page, wrote: “Governor Sanwo-Olu must come down hard on these okada-riding characters. A parallel government is pitiably taking shape. What happened in Ogba today is despicable.”

A responder, Mr Emeka Alex Duru, said: “You need to witness what they did at LASU end the other day. I am beginning to suspect that there is a lot to those guys than we may know.”

Another person, Simon Osigwe, said: “At Mile 2, okada riders are a government of their own.”

Mr Sola Ojewusi warned: “We are sitting on a keg of gun powder. Okada is taking over the nooks and crannies of Lagos.”

Govt is unfair to us —Operators

The latest move by the state government is generating a lot of misgivings among okada operators.

Speaking with Saturday Tribune at Berger Bus Stop, some of the operators alleged that the decision of the government to ban okada from Lagos routes was meant to send them out of jobs, pointing out that tanker and truck accidents, as well as the traffic snarl on the highways were more than the nuisance okada created.

“Why is the government not placing ban on trucks and petrol tankers despite the menace they are causing in the metropolis?” one of them wondered.

Another okada rider who identified himself simply as Taiwo said he had no place to go, threatening to continue to ply his trade on the highway, irrespective of the government’s decision.

“I don’t know how to steal or do yahoo, so I must ride okada to feed myself and my family. How many jobs are available now? How many jobs has the government created? We are trying to survive on our own; they are planning to send us away. Let’s wait and see. I will continue to ride my okada, ban or no ban¸” he said

Another rider who refused to mention his name said their association was asked to register with NURTW to see how they could be part of the new initiative. He said some of them declined because they were not members of the ruling All Progressives Congress (APC).

“The Lagos State government will not include you in any of their projects except you are an APC member. See all the street sweepers, Kai Brigade and LATSMA jobs, they are giving to party members. We don’t know anybody. Since they cannot give out jobs to ordinary Nigerians without party affiliation, we are not interested,“ he said.

Efforts to speak with the leadership of the okada union were abortive as the leaders were said to be under instruction from the state NURTW not to say anything publicly about the coming official decision.

Appraising the security situation in Lagos, the Commissioner of Police, Mr Hakeem Odumosu, said between January and early May, 320 commercial motorcycles were arrested in connection with 218 cases of criminal incidents in which 78 suspects were detained and 480 guns of various calibres siezed from them.

During the same period, the commissioner said, okada accounted for 83 per cent of 385 cases of avoidable fatal vehicular accidents in Lagos.

He said: “The menace of okada operators does not end with avoidable accidents. Crime reports from the field have shown that a greater percentage of crimes ranging from armed robbery, cultism, kidnapping, murder, burglary and stealing to traffic robbery, carjacking and cash snatching from bank customers are attributable to hoodlums who operate on okada.

“The nuisance constituted by the okada operators on Lagos roads has become a danger to law-abiding citizens. Sections of the Lagos populace have come to regard commercial motorcycles as a necessary evil. It has become imperative for the government to take more drastic measures against their notoriety.

“The state police command strongly advises the state government to immediately review the current guidelines guiding the operation of okada as a means of commercial transportation in the state and take decisive legal and administrative steps and policies that will curb their traffic, criminal and other nefarious activities in the state.”

Available statistics from the Lagos State Traffic Management Authority (LASTMA) revealed that no fewer than 619 people were killed or injured in okada accidents between 2015 and 2016. The breakdown shows that 107 people died while 512 sustained serious injuries. Among the dead were 71 males and 36 females.