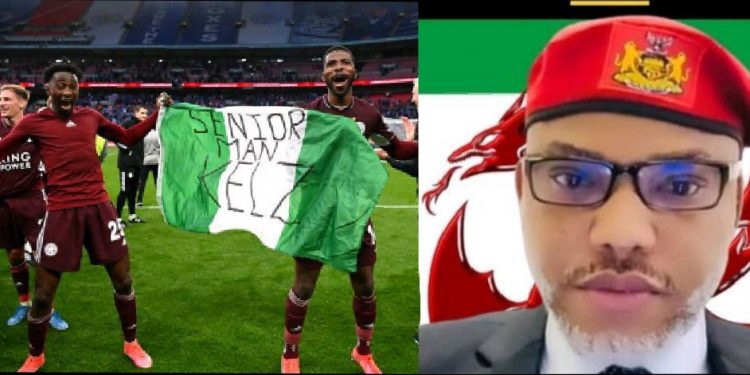 Let us not forget that there are two Nigerians, Kelechi Iheanacho and Wilfred Ndidi, who are also from the Igbo tribe, that were amongst the “first eleven” players who played the match and won the trophy for Leicester Football Club.

In the moment of celebration, these two Nigerians who have been doing exceptionally well for their respective club, brought out the Nigerian flag as they celebrated the victory which was the first ever for the club.

However, them celebrating with the Nigerian flag did not go down well with the self-proclaimed leader of the Indigenous People Of Biafra (IPOB) in the person of Nnamdi Kanu.

Nnamdi Kanu, who was very disappointed at these two players took to his verified Twitter handle and slammed them because they did not support him in his agitation to create a Biafra state.

While letting his disappointment known in a tweet on his verified Twitter handle, Nnamdi Kanu said that, “Gerard Pique, who had already won a world cup with Spain, did not turn his back on Catalonia freedom when he was needed. But our Iheanacho and Ndidi with #zoo flag? Shame!.”

In another tweet, he threatened to banish Iheanacho and Ndidi for flying Nigeria flag instead of Biafra flag.

Kalu tweeted: “After All I Have Done For Them to Come This Far.
They Said Their Generation Have No History With Biafra. And They Will Be Remembered As Coward.