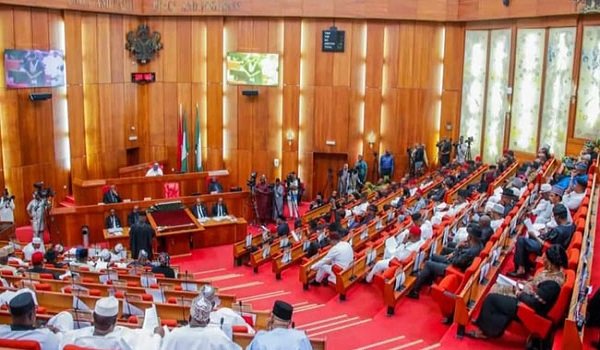 The Senate, on Wednesday, moved to prohibit the payment and receiving of ransom for the release of any kidnapped, imprisoned or wrongfully confined victim in the country.

This followed the consideration and second reading of a Bill by the upper chamber, titled: “Terrorism prevention (amendment) Bill, 2021,” and sponsored by Senator Ezenwa Francis Onyewuchi.

Onyewuchi in his lead debate said the Bill seeks to amend the Terrorism (Prevention) Act, 2013 to outlaw the payment of ransom to abductors, kidnappers and terrorists for the release of any person who has been wrongfully confined, imprisoned or kidnapped.

According to Onyewuchi, the bill essentially seeks to substitute for section 14 of the Principal Act a new section to read: “Anyone who transfers funds, makes payment or colludes with an abductor, kidnapper or terrorist to receive any ransom for the release of any person who has been wrongfully confined, imprisoned or kidnapped is guilty of a felony and is liable on conviction to a term of imprisonment of not less than 15 years.”

He expressed worry that kidnapping has become a fast and lucrative business, saying “it has now remained the most virulent form of banditry in Nigeria and the most pervasive and intractable violent crime in the country.”

Attributing the spate of kidnappings in the country to factors such as corruption, unemployment, poverty and connivance of security agents, Onyewuchi lamented that the frequency at which persons are kidnapped daily puts most Nigerians at risk.

“Kidnapping is on the increase in Nigeria and it is prevalent across all the geopolitical zones.

seeks review of NIN policy as requirement for JAMB registration
“Some blame the rise of this criminal activity on poverty, religion, politics, deficiency of existing laws, unemployment, connivance of security agents, corruption, and greed among others.

“Our unemployed youths are also turning out to kidnapping to get money (ransom) as a survival strategy.

“Whatever the reason, it is most obvious that kidnapping in Nigeria puts everyone at risk, the rich and the poor, old and young, male and female, foreigner or indigene, expatriate or non-expatriate, traditional rulers and religious leaders, among others,” he said.

Citing a report compiled by the Financial Times and the USA Global Risk Consultancy in November, 2019, the lawmaker noted that Nigeria has the highest rate of kidnaps for ransom of both locals and foreigners in all of Africa with kidnappers operating in each of its 36 states.

According to him, “the reason behind payments of ransom is rooted on the fact that people easily identify with individual suffering.

“However, History has shown that even where ransom is proven to have been paid, the life or safe return of a kidnap victim may not be guaranteed.”

He observed that countries like the USA and the United Kingdom do not support payment of ransoms to kidnappers.

“Payments of terrorist ransoms is illegal under the UK Terrorism Act 2000 while the USA adheres to a strict No-Concessions policy on the payment of ransom,” Onyewuchi said.

He advised that, “the continuous payment of ransom must not be encouraged, in addition government should provide adequate security and strengthen the economy as a matter of urgency, accelerate its poverty alleviation programs, provide employment opportunities targeting youths who are mostly involved in abductions and kidnappings, strengthen our law enforcement agencies, and provide the necessary support to end the menace of kidnapping.”

The Terrorism Prevention (Amendment) Bill, 2021, after scaling second reading, was referred by the Senate President, Ahmad Lawan, to the Committee on Judiciary, Human Rights and Legal Matters for further legislative work.

The Committee, chaired by Senator Michael Opeyemi Bamidele was given four weeks to report back to plenary.

Both Bills were referred by the Senate President to the Committee on Tertiary Institutions and TETFUND for further legislative work and to report back in four weeks.

JUST IN: Two Persons Burnt To Death In Auto Crash