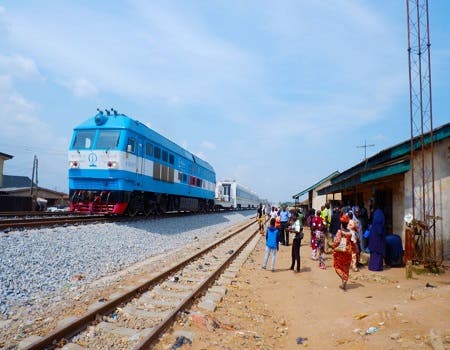 The Minister of Transportation, Hon. Rotimi Amaechi has disclosed that Lagos-Ibadan railway project is 89 percent ready and would be officially commissioned in June 2021 by President Muhammadu Buhari.

Speaking at the weekend during an inspection of the project in Lagos, Amaechi expressed hope that the little challenges observed in the course of the inspection would be resolved before the commissioning date.

“I hope the Office of the President will approve the commissioning date in June, we’re not 100 percent ready, but we are hoping that by the time they give us a date in the next three weeks, we will be ready.

“We have almost come to the end of construction, there will be a little bit of erection here and there but what started in 2017 or 2018 is coming to a conclusion.

“The Eleven stations are ready, some of the under passes and some of the over passes are also ready.The bridge at Constain that was demolished has been replace,” he stated.

Amaechi explained that the challenges confronting the rail line at the Apapa seaport will also be resolved.

“There are two challenges they (contractors) are talking about, the first one is a temporary challenge which they think they can resolve it within one month, but the entire thing that will take the rail line into the seaport may take another four months to six months.

“You can actually take a train to the seaport, but that is not just the end, we want to make sure that we are in position to move cargos from the seaport straight to the train, instead of transportimg them (cargo) a little further to put them on the train.

“One thing we want to see happen is the movement of cargo from the seaport using the train as a means to decongest the ports,” he stated.