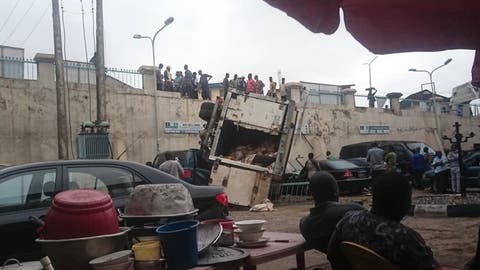 A driver on Friday escaped death by the whiskers as his truck plunged into ASE Shopping Complex which is a stone throw from Veterinary junction along Mokola-Ojoo Road, Ibadan, Oyo State.

Witnesses said the brake of the truck had failed while descending from a street on Mokola hill directly opposite the complex.

In a flash, the witnesses said, the truck loaded with substances believed to be sawdust, headed towards the busy Mokola/Ojoo dual carriage road, forced itself across the road median and rammed into the fence of the complex before plunging into the premises.

They said the truck landed on two cars and two buses parked beside an electricity transformer in the compound, crushing them in the process. No one was in the vehicles.

The truck driver, as gathered, who escaped death, only sustained a cut in the head.

The accident attracted road users and owners of the lock-up shops in the complex who gathered in groups trying to recap the movie-like incident and expressed gratitude to God for averting death.

LG Election: We Have No Hand In The Death Of Two Persons At Eruwa—Oyo/Osun Command Customs