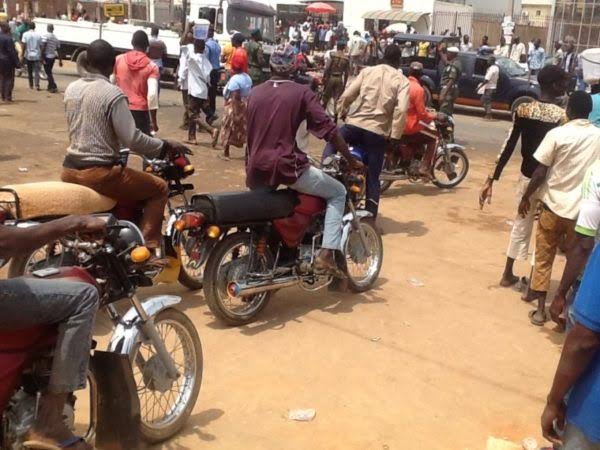 Commercial motorcyclists, popularly known as okada, in Obantoko area of Abeokuta went on rampage on Tuesday following the killing of their colleague in an accident involving a truck.

TODAY SPLASH gathered that the deceased motorcyclist died when he reportedly rammed into the truck.

Exasperated by the unfortunate incident, his fellow okada riders were said to have caused a serious crisis along the ever-busy road, attacking truck drivers and their ‘motorboys.

The mayhem caused by the irate bike riders led to serious traffic in the area as people ran helter skelter to avoid being attacked.

Our correspondent gathered that it took the intervention of the police to restore normalcy in Obantoko axis.

But, the Ogun State police command said it will no longer tolerate this “unruly and disorderly conduct of the motorcycle riders.”

According to the command’s spokesman, Abimbola Oyeyemi, okada riders are fond of violently attacking any motorist, who is involved in an accident with any of them, irrespective of whether or not such motorist is at fault.

In most cases, Oyeyemi said, they will not only set such vehicles ablaze, but they will also inflict serious injuries on the driver, the motor boy, and other motorists, and in some cases, cause deaths of drivers.

He said, “The most recent one is the mayhem caused by the okada riders along Asero/Obantoko on Tuesday 25th of May 2021, simply because one of them had an accident with a truck.

“In view of this, the Command is hereby sending a note of warning to all Okada riders in the State, that such unruly behaviour will no longer be tolerated.

“Henceforth, the leadership of any association or union whose members were involved in any act of vandalism will be held responsible.

“The implication of this is that leaders of associations should be able to know their members and have control over them. The recent incident is going to be the last time such barbaric attitude will be allowed in any part of the State as anyone found to be involved in such an act will be dealt with in the most decisive manner,” Oyeyemi threatened.