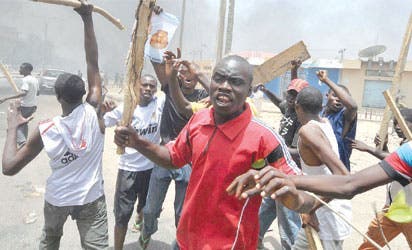 A woman suspected to be a ritualist was burnt to death by an angry mob Monday evening, at Abule-Ado, along the Mile-Two Badagry expressway, Lagos.

However, the Police said she was mentally deranged and subsequently vowed to arrest those behind the jungle justice.

Residents said the unidentified woman who pretended to be insane, was apprehended after they were alerted by the cry for help from a child she was alleged to have abducted.

A curious motorcyclist who stopped to urinate by a bush part along the expressway reportedly heard the desperate shout for help first. he was said to have alerted other persons when he discovered a little child that was allegedly held hostage by the woman.

A mob was said to have descended on her. When searched, she was alleged to have been found with an android phone, N3 million cash and three AK 47 riffles which were kept in a sack inside the drainage system.

The mob descended on her and set her on fire before the arrival of Policemen from Area ‘E’ division.

A mammoth crowd besieged the scene to have a glance at the charred remains of the woman.

When Vanguard arrived there, a commercial motorcyclist, Lawal Akindele explained that “It was the cry of the toddler that drew the attention of one of us. As the cry of the child continued, he moved closer and found the child with the woman”.

Another eyewitness who simply gave his name as Abass, said, “ the woman had been living there for years now before the incident that led to her death. She built her hut with red sand. Surprisingly, the supposedly red sand she used to build her hut is not sourced within. So where exactly did she get the red sand from? All the while she was building this hut what did the authorities do, they turned a blind eye”.

At the spot where she was burnt alive, charred bones, suspected to be that of a human jaw, spinal cord and thigh littered the ground. There were also different clothes and shoes scattered around.

An Identity card of a pupil was also recovered. eyewitnesses said when the management of the school was contacted, it claimed the said ID belongs to a missing pupil.

Reacting to the incident, the Lagos State Police Command said it had commenced investigation into the killing of the woman whom it said was insane.

A spokesman for the command, CSP Olumuyiwa Adejobi, said, “ Based on preliminary investigation, it was discovered that the mentally challenged woman had been living in the area for several years before she was lynched and set ablaze by some hoodlums on the allegation of being in possession of a baby and three AK 47 rifles.

The Command wishes to state categorically that the woman was just murdered for reasons best known to the perpetrators of the heinous crime, as the investigation revealed that no baby and AK 47 rifles were found in her possession neither were they recovered by the perpetrators or the police. It’s just a clear case of murder.

The Commissioner of Police has therefore ordered that the matter be transferred to the State Criminal Investigation Department, Panti, Yaba-Lagos for proper investigation and that the culprits should be arrested and charged to court with murder.

The Commissioner of Police, Lagos State, CP Hakeem Odumosu, also warned against jungle justice which is inhumane, criminal and detrimental to smooth Administration of Criminal Justice in Lagos and in Nigeria at large. He equally warned that the command will not tolerate such act as the long arm of the law will catch up with anyone or group of persons who engage in jungle justice in the state.