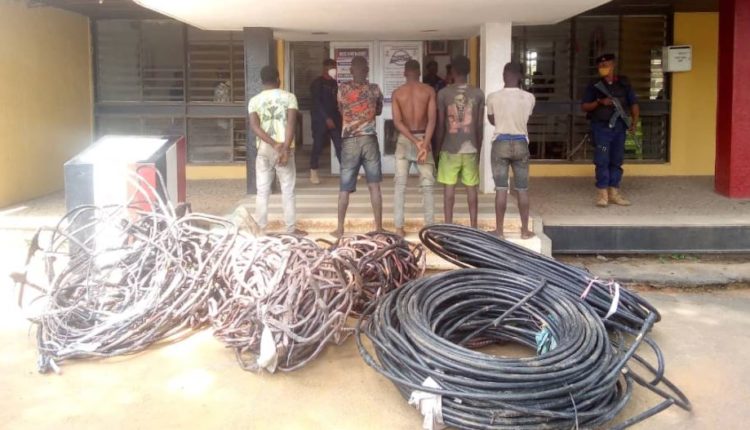 Briefing journalists at the Command Headquarters, Agodi Ibadan, while parading the suspects, the State Commandant of Corps, Commandant Iskilu Akinsanya said the Corps are mandated to see that all the Federal Government properties are protected from the vandals adding that the patrol operatives team at about 2:15 hours arrested telecommunication cable vandals.

He said, the suspects were arrested with the vandalized telecommunication cables in Bodija around 2:15 am.

“The first three suspects were arrested with the vandalized cables along U.I Road at Bodija Market, they later led the patrol team to where they used to keep their looted vandalized products, where the two others were eventually arrested at the store.

” I’m appealing to the good citizens of the State to always call the attention of security operatives whenever they notice any strange movements or occurrence in their various environments, because failure to do so can be dangerous, for instance if our electricity cables are vandalized we are the one that will suffer for it, so I urged the members of the public to always say something whenever they see something.

Exhibits recovered from the suspects are rolls of telecommunication cables.

Some of the suspected criminals however denied their involvement in the crime.