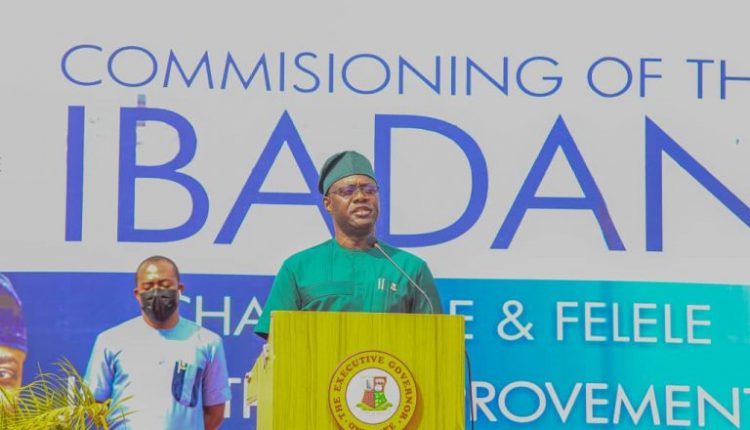 The Governor disclosed this on Saturday while commissioning the Challenge-Felele-Idi Odo Junction Improvement Works and Car Park to mark his second full year in office.

He also took the opportunity to chide those who claim to be the architects of modern Oyo State for constructing less than 40 kilometres of Oyo State roads over two terms in office.

He said: “One of the things I said during my electioneering campaign was I wanted my administration to be remembered for improving the lives of the good people of Oyo State. Those who said they are the architect of Oyo State only did less than 40km for eight years they spent in office. Whoever has contrary information on this should come out and speak up. Our plan is to engineer a modern Oyo State.”

“I knew that in as much as a lot can be accomplished through philanthropy and crowdsourcing of funds, the reach of such individual or collective action is very limited. Somebody said I use to give out money before I became the governor and since I became the governor, I stopped spending money.”

“To affect the majority of citizens, people in power must use state funds to make life easier for the citizens and this is what we have been doing. This junction improvement here in Challenge and Felele is just one of the several ways that our administration is keeping its promise to the people of Oyo State.”

“Before now, we have had people endure traffic at this junction for 20-30 minutes and even more because the road was narrower and then we had transporters taking up a whole lane. Before I became the governor, the condition of this junction was terrible.”

“I was thinking we should construct flyover here to link up with that of Molete but as we always do, our decisions are driven by data, science and logic. So, we carried out a study and carried out this with the fund we had.”

“When we say time is money, we can then quantify what 30 minutes of lateness to a project every day can cost in real terms. So, with this improvement, we did not just have traffic lights installed to ease the traffic flow, but we have built a park for vehicles and motorbikes to transit and ease movement along this junction.”

“Transporters and visitors can park their vehicles without hindering traffic. The road has been expanded, creating even more space for vehicular movement. We also have three modern bus stops constructed for commuters.”

“For some people living in some other parts of the country, they may think 30 minutes traffic is not so much, but here in Oyo State, our slogan is that we will only make things better, and what we cannot make better we will not make worse.”

“And since our administration came into office, we have been doing our best to improve the lives of the people of Oyo State. The results are there for all to see. Data from the National Bureau of Statistics keeps showing that we are doing the right things here in Oyo State.”

“So, while some people get angry when the National Bureau of Statistics released their figures and begin to look for ways to discredit them, here in Oyo State, we look forward to the release of data because it helps us know how well we are doing compared to other states around us and also reveals what we need to tweak for even better results.”

“So far, we are happy with the results we are getting, and as I said, in my State Broadcast earlier today, we can proudly say that we have made the lives of the people of Oyo State better than we met it 2 years ago.”

“Come next year, we are sure that it will be even better than this year. By the end of this year, the road from Challenge through Akala Way that links Odo- Ona, would have been completed, and those going to Apata won’t need to use this road again.”

The Commissioner for Works, Infrastructure and Transport, Professor Daud Sangodoyin also spoke at the launch and noted that the completion of the project is a crucial development for the council area. He also added that the successful project will boost economic activities in the area and ease business in Ibadan and Oyo State.

“I thank the name of the Lord for giving us this edifice through our leader, Governor Makinde. These arch and junction improvements were approved in 2020 to Messrs.’ Planet at the cost of N2.5bn. Today, we are happy to come around to commission this edifice.”

“The major features of the junction improvement include artworks, construction of reinforced concrete drain. The components also include traffic system management, taxi stand and motorcycle stand.”

“Technically, the pavement is made up of 200mm, thick laterite, saw base and 200mm thick stone base with 500mm asphalt grinder course and 40mm thick asphalt wearing course.”

“The successful completion of the junction improvement has opened up on critical development of the local government area here, which is Ibadan South West. Of course, it has also a chain effect on other areas in Ibadan. It will also serve as beautification of Ibadan Township.”

“It will foster economic well-being of the people, ease of doing business in Ibadan as well as upgrade the standard of citizens and residents of the state.”