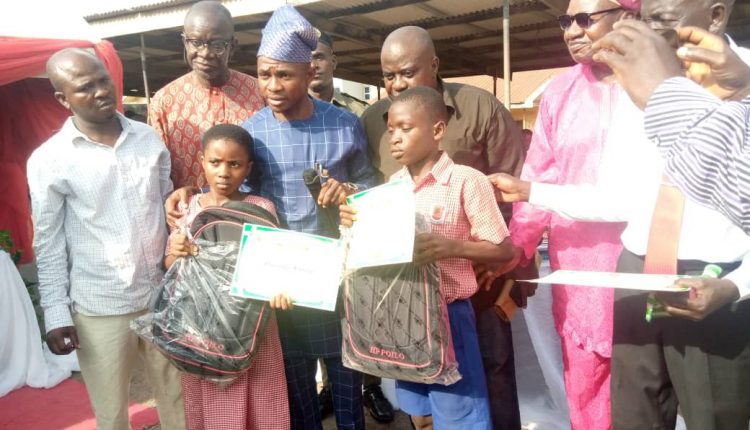 Part of the campaign promises and manifestos of the executive chairman ibadan north local government, Hon. Yusuff Oladayo Sahib (Agba Egbe) and in line with the back to school initiative of the oyo state government.

The management of Irepodun lcda spearheaded a quiz competition and distribution of exercise books to primary schools in Irepodun local Council Development Area under the administrative direction of Mrs. (Dr) Alaga Ayo Monsurat.

The program which was held at the Ibadan north local government area council had in attendance the council boss, hon. Yusuff Sahib Oladayo honourable councillors of ibadan north LG, Ex cos of the people’s Democratic Party PDP, parents, teachers and also well-wishers.

Goodwill message was delivered by the head of local government (HLA), Pastor O. Olaoye; stating the reasons for the gathering and appreciating the support and the presence of Hon. Yusuf Sahib Oladayo for his humility and timely response to the occasion.

Miyetti Allah: “Allow Us To Enforce Open Grazing Ban With…

He also stated the need for the quiz competition, which should be held on a regular basis.

The primary school quiz competition, held today, was the grand finale and presentation of award. The three schools who made it through to the grand finale of the competition were presented educational materials such as school bags, Exercise Books, Text Books and Cash sum accordingly.

In the chairman’s welcome address, he acknowledged the impeccable governance of governor Seyi Makinde and the provisions of a favourable platform for good governance that the governor of Oyo state has provided. He also appreciates the efforts of the acting head of Irepodun LCDA, for celebrating academic excellence at the primary levels. Sharing his primary school history with the public, he celebrates the pupils academic prowess, and he promised to always be at the forefront of academic excellence in the state.

Cheering the atmosphere, the Tampan group of Ibadan north entertained the guest with their artistic cultural dance and also eulogy.

The presentation of over 400 books and other educational materials was presented by the Chairman and heads of units of Irepodun lcda alongside the honourable councillors respectively .

Inside Story Of How 51-year-old Ibadan Businessman Was Murdered

AOPSHON Played Host To Ibadan North LG Chair’ Agba Egbe, Having Been The…