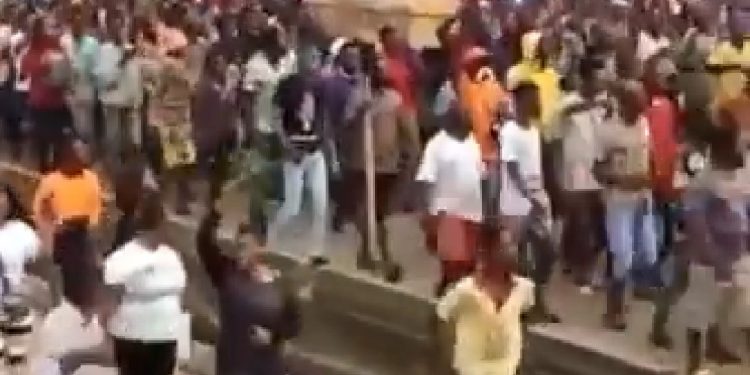 Some protesters have been spotted in Ibadan, Oyo State Capital shouting Buhari must go with the president’s name on the coffin.

The protesters were seen in Mokola area of the ancient city in large numbers on Friday.

This protest was staged as the National Association of Nigerian Students (NANS) earlier announced they will evoke nationwide protests on June 12, in a bid to persuade the Nigerian government to take stronger action against the daily kidnapping and killing of students and others throughout the country.

Nigeria’s Democracy Day is a public holiday to commemorate June 12 to mark the restoration of democracy to the country.

This year, protestors are planning to boycott the public holiday by holding protests.

Members of NANS insist there is nothing worth celebrating as the country continues to be terrorised by the criminal gangs.

Also, the Yoruba Nation agitators has slated their protest for same date across Yoruba states.

However, the Buhari must go protest had been staged in Ibadan, Oyo state capital today.

Why I Made JUNE 12 Democracy Day -Buhari