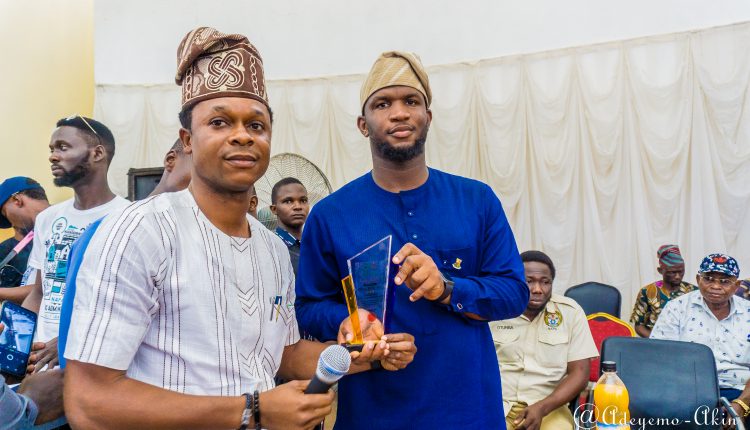 The Polytechnic Ibadan has presented an award of excellence to Governor Seyi Makinde’s Chief of Staff Chief Bisi ILAKA, Ibadan North Local governernment Chairman, Hon Yusuff Sahib Oladayo, and the Special Assistant on Student Affairs, Hon. Victor Olojede in recognition of their sterling performance in ensuring that the Students of Oyo state were fully represented,   in an award ceremony held at the Institution Assembly hall of the Polytechnic Ibadan today.

Hon Victor Olojede speaking at the event after recieving the award, thank the Institution for considering him worthy enough to be bestowed with such an award, he Assures the students in the state of more commitment, saying my office is open to all Students any day any time, we will continue acting as a bridge between Governor Seyi Makinde and the Oyo State student community.

He enjoins the Students not to join Cultists group, “Be focus on your studies, make your parents proud, and you wil be proud of what you’ve become” to be good ambassadors of your school and to the State entirely, you need to be focus and be determined he said.

Hon. Olojede thanked the Institution Union leaders, led by Com Blessing Fadare leadership and all Oyo State students for making his job easier and promised to continue to act in their best interests. He also urged them to do their best to emulate Governor Makinde’s leadership style.

The event also saw the Chief of Staff to the Governor, Chief Bisi Ilaka presented with an award, for his fatherly role played to ensure that no stone was left on touched at any time, when they came calling.

BREAKING: Yomi Fabiyi, Others Protest At Panti Over Baba…

The presentation of the award was done by the Institution Rector Prof Kazeem Adebiyi, while the Citation of the Chief of Staff was read by Hon Victor Olojede.

ILAKA thanked the Institution for the award, in his words, ” I appreciate everyone behind this award, on behalf of this government ably led by our amiable Governor, His Excellency Engr Seyi Makinde, You can all see that the walfare of the students, Youths and Workers is one of many our governernment has priotise, we will keep listening and ensure we keep doing more to put the State ahead of others.

The Executive Chairman of Ibadan North Local Government Hon Yusuff Sahib Oladayo in his remarks thank the Institution for honoring him with the award, promise to always represent his Alma mater with a positive image, while he assure the entire students in Ibadan North of Service worthy of note.

He said ” we as a the governernment closer to the people will complement the wonderful work our Governor Engr Seyi Makinde has been doing for the students/Institutions in the state”.

He also enjoins the Students to be good Representations of the Institutions wherever they find themselves.