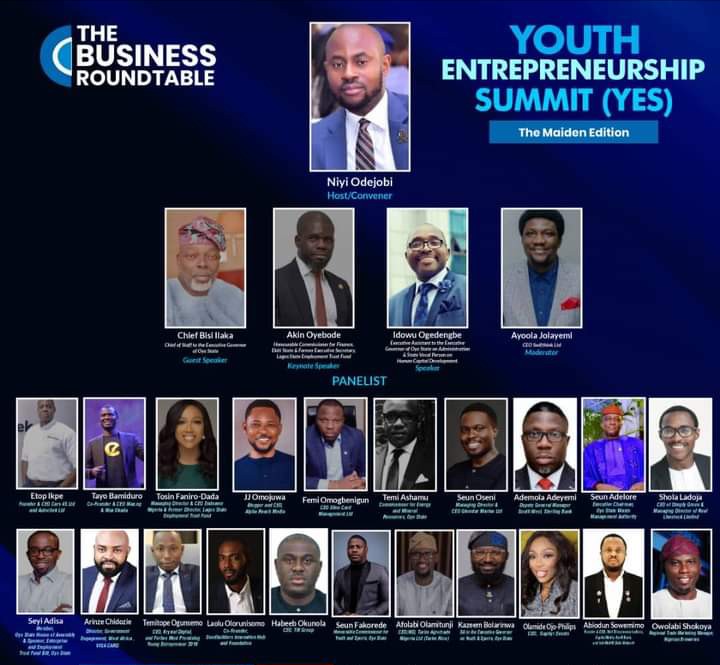 The Business Roundtable is a social development and youth empowerment nonprofit organisation, domiciled in Ibadan with the aim of supporting the state government’s effort in job creation, capacity building, mentorship, liaising with business owners and government in terms of ease of doing business.

The convener Niyi Odejobi a foremost Senior Executive of a multinational company in Nigeria and also a managing partner of Ibadan Hospitality Company, who’s also an Executive director of The Business Roundtable spoke exclusively with TODAYSPLASH on the forthcoming Youth Entrepreneurship Summit in Ibadan.

The program which is slated to hold on Friday the 25th June at the International Conference centre, Ibadan, is aimed at exposing youths in Oyo state to series of opportunities distributed across various sectors of the economy through thorough mentorship from top professionals from various local and multinational organization.

He posited that the rising insecurity and anti-social vices across the state today could only be tackled by engaging the youth in a productive venture, he decried the geometric rate of increase in number of unemployed youths in Nigeria, despite the government’s effort; “this in turn is causing many issues of insecurity in the country and if unemployment is not reduced to its barest minimum, stories of insecurity will continue to be on our front page”

“We’re bringing in private sectors to find a way of supporting small and medium scale enterprises in breaking even, in terms of financing, branding and business management”

The participants would be having a face2face interaction with people who have made name and remarkable success in their chosen path to mentor and guide them on the path to success in such field.

Also, viable business plans would be reviews and examined by these professional and deserving ideas would get grants to kick start their business.

He also said the program would henceforth commence every quarter to update the knowledge of the participants and check their progress in business.

The calibre of people that are expected at the summit includes top CEOs from within and outside Ibadan like the founder of Cars45, Etop Ikpe, CEO of Max.ng, Akin Oyebode, The pioneer Executive Secretary of the Lagos Unemployment Trustfund, Seun Oseni, CEO of Glenstar Marine, Aare Gbenga Eyiolawi, the CEO of Titan Farms and the CEO of Tarim farms, Banky Lola, Sola Ladoja and the likes of others who’ll be there to add value to the participants at the event.

The organization is also directly partnering with the Officer of the Executive Assistant to the Governor on Human Capital Development as well as the Ministry of Youths and Sports in Oyo state, so top state government functionaries like Chief Bisi Ilaka, the Chief of Staff to the Governor, Rev. Idowu Ogedengbe , The E.A on Human capita Development to The Governor, Hon. Seun Fakorefe, The Commissioner for Youths and Sports, Hon. Kazeem Bolarinwa (Ibadan Pride) S.A Yiutus to the Oyo State governor, are expected to be there to enhance government support in creating a smooth synergy between the organisation and the state in reducing unemployment in the state.

Recall that oyo state was recently ranked as the second biggest startup ecosystem by Startupblink, a world most comprehensive startup ecosystem map, The Business Riuntable seeks to mentor Oyo state youths to take advantage of this business friendly atmosphere in the state to kick start their way to stardom in their chosen career, the event promises to be informative, impactful and life changing to every participant.

Why I Can’t Be With One Woman – Singer, Tekno