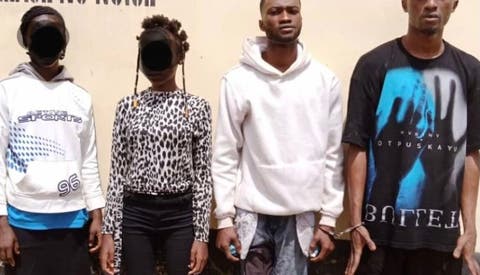 A 16-year-old girl, Abimbola Suluka has been arrested alongside her boyfriend, Oluwaseun Olajide by the Ekiti State Police command for allegedly kidnapping herself to raise money to pursue her career in acting as against studying of medicine demanded by her mother.

The Police Public Relations Officer (PPRO), ASP Sunday Abutu in a statement on Saturday said the duo were arrested on Thursday in a hotel in Ado-Ekiti, the state capital where they lodged and demanded N500,000 ransom.

Abimbola is alleged to have conspired with her 25-year-old boyfriend and two of his friends to stage the abduction so as to raise money and relocate from the state following her mother’s insistence of her to study medicine.

Abutu explained that Abimbola’s sister had gone to the police station to report that her sister was missing after leaving the house for school.

He said the sister explained that when Abimbola’s phone was called, an unknown person answered the call and informed them that she was in his custody and would not release her until a ransom of N500,000 was paid.

The police spokesman noted that the operatives of the anti-kidnapping unit tracked and arrested the owner of the account supplied for the ransom payment, and forced to lead the police team to the hotel where the supposedly abducted Abimbola and her boyfriend were nabbed alongside other suspects.

According to the PPRO, Abimbola with the three others confessed to committing the crime, claiming she wanted to raise money from her family members to enable her relocate from Ekiti State since her mother insisted she study medicine as against her own dream of becoming an actress.

“During interrogation, Suluka Abimbola confessed to the crime as well as Oluwaseun Daniel Olajide and Adefolaju Caleb. Suluka Abimbola said she decided to conspire with the other suspects to do that in order to raise money from her family members to enable her relocate from Ekiti State since her mother insisted that she go through medical field as against her dream of becoming an actress,” Abutu said.

He added that the Commissioner of Police, Tunde Mobayo had ordered thorough investigation on the incident for further action to serve as deterrent to other criminally minded persons in the society.”

Why I Can’t Be With One Woman – Singer, Tekno