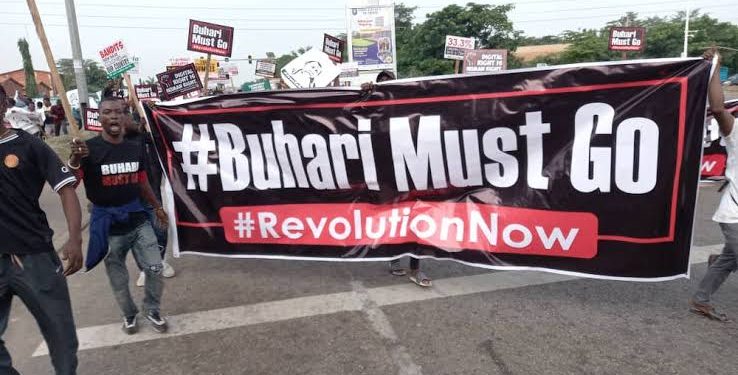 The protest tagged #BuhariMustGo started in the early hours of Monday, with the protesters chanting ‘Buhari Must Go’ and anti-government slogans.

Some of the complaints include worsening insecurity, poor economy, and massive unemployment.

A video seen by SaharaReporters shows some of the protesters saying they could not even burn a tyre because there was no fuel to do so, which was a veiled reference to how Premium Motor Spirit (PMS), also known as petrol had increased under the government of Buhari from N87 to about N160.

Also on June 12, Democracy Day, many Nigerians also trooped to the streets in many states across the country to say they were tired of the government of Buhari.

Some of the complaints include worsening insecurity, poor economy, and massive unemployment.

For instance, in Ibadan, Oyo State and Akure, Ondo State, socio-economic activities were grounded to a halt following the June 12 protest embarked upon by the youths.

The youths in their numbers took to the streets to join their counterparts across the country to demand good governance and end the challenges confronting the country.

As early as 7:30 am, the youths converged on various locations in the capital citiesx chanting “Buhari must go”.

Video: Read Interesting Story Of This 21-year-Old Student Who Spent 15 Years In A Class While His Mates Have Graduated