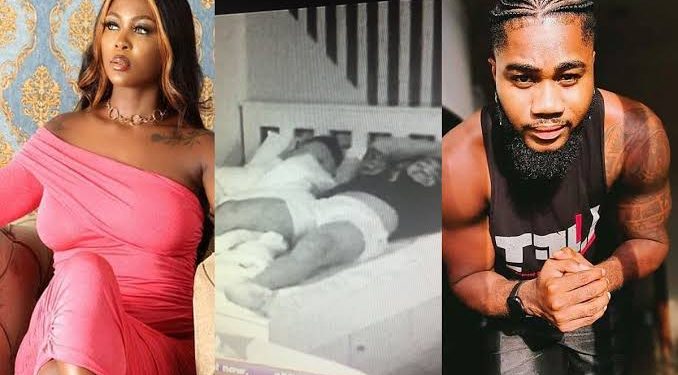 The first episode of The Big Brother naija reunion show focused mainly on Praise, Katrina, Dorathy and bright. They all took turns in sharing their thoughts and ended up exposing too much secrets about themselves. Ebuka was good enough to ask questions that triggered the housemates to reveal secrets.

When he asked Katrina to talk about her relationship with Praise in the house, Katrina did not hesitate in spilling all the secrets that she had kept inside. Katrina confirmed the fact that both she and praise had something going on in the house which nobody knew about. She admitted to drawing Praise to her own bed and convincing him to sleep with her.

In the process of explaining what happened between herself and Praise, she eventually revealed that Praise lasted for only 5 seconds with her. She got angry and then left him on her bed even the next day she did not acknowledge Praise because she was disappointed.

After all these happened, and they both found themselves outside the show, Praise went ahead to reveal that before they had their interview, Katrina called him to beg him not to reveal what happened in the house. He kept this to himself during the interview and claimed that they only cuddled aggressively. This angered Katrina the more and made her to even spill what happened in the hotel room.

All these Revelations further proves that alot of things happened inside the house and outside the house that fans didn’t know about. The housemates are slowing revealing all the juicy secrets that have been kept hidden in a while. Hopefully we get to find out more things about the house mates in the coming episodes.

Each episode of The Big Brother naija reunion show has its own drama, and each drama gets interesting by the day. We have gotten to see each housemate reveal their true colours, tables were broken and a lot of Secrets were revealed. Well a lot of fans actually expected this because, the past Big Brother reunion shows revealed a lot of things about the housemates that even the fans did not know about.

Watch the full video below;