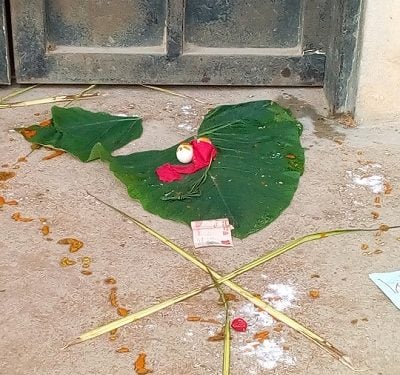 There is palpable fear in Uyo, the Akwa Ibom state capital, as suspected cultists have issued a 24-hour ultimatum to the principal of Uyo High School, Mr. Michael Iwok for him to recall their suspended members back to school.

As a warning, some fetish objects such as fresh pepper, palm oil droplets, peeled cooked egg, palm front, a piece of red cloth, tied rope and ten naira notes were on Thursday dropped at the entrance of the principal’s office.

Similar items and several inscriptions, believed to have been dropped by suspected cultists, were also seen at the entrance to Senior Secondary 3 classes.

In a bid to avoid any form of the onslaught, the state government Thursday ordered the closure of the school.

This Newspaper gathered that trouble started when some students suspected to be cultists were recently suspended by the school authority.

Investigations reveal that on several occasions these two sets of students are responsible for the mayhem in the school.

The Police Public Relations Officer, SP Odiko MacDon when contacted said the closure of the school over threats by suspected cultists has nothing to do with the police.

He said in pidgin English ”Government close down school how that one come concerns me.”

Fatai Buhari Did Not Take Loan, GTB Is The One Owing Us – MD, Abadat Ventures