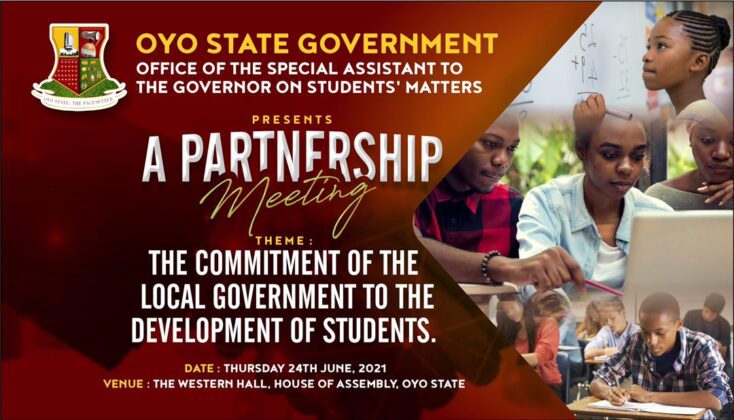 Local Government administrations in Oyo State, have been told the need to show commitment to the student body in the state on the various benefits accruable to them

This came to the fore on Thursday, during a partnership meeting, organised by the Office of the Special Assistant to Governor of Oyo State on Students’ Matters, with the leadership of various students’ unions in the state, which held at the Western Hall Building, Secretariat, Ibadan.

While speaking at the event, on the theme: “The Commitment of the Local Government to the Development of Students,” the Special Assistant to Governor ‘Seyi Makinde on Students’ Matters, Mr. Victor Olojede, Pointed out that it became imperative for local governments to help the state government in many ways because the governor has been performing well since his assumption of office.

According to him, payment of bursary, payment of mobility for students body, getting them involved in their day to day activities, are some of the functions of the local government administration.

“We feel the LG can help the state government in many ways because the governor is doing very well. So, the LG too should decentralise what the state government is doing and being to do things for students too. For example, payment of bursary, payment of mobility for student body, getting them involved in their day to day activities. This is the essence of this meeting.”

“Another aim is to create synergy between the local government and the student body of Oyo State.”

“I’m countries of the world that are better than here, you see students getting involved in being part of special committees of the government. It is actually a necessity. The students are the brain box of the state and development. So, we must make sure we involve them because we know they have the knowledge and ideas.”

In his remark, the Students’ Union President of the University of Ibadan, Com. Akeju Olusegun, maintained that the local government administrations should operate an open door policy, where students could easily gain accessibility to them.

“There has to be an open door that will be accessible by students and we know that students are known for ideas, innovations and all other things. So, these talents can be harnessed by the local government to make progress.”

“Also, in the aspect of information sharing, the students have more information even than the local government chairmen themselves. So, in most cases, it is important that these pieces of information are being shared by the two parties.”

“On security issues as well, they can come together to synergise. Last year, we had issues around Oyo State, where students had to protest and all of that. So, if we work together, these things can be avoided, and we can do things together in a lot of ways,” he said.

On his part, the President of Polytechnic Students’ Union, Com. Olalere Benedict, disclosed that students with best brains could be useful in the area media and activities of the local governments.

“Today’s programme is the first of its kind in the history of Nigeria, in which community of students will be having a discussion with the chairmen of local government because I think the idea is that, the governor alone cannot do all the work for the student community, and we need to bring the chairmen to involve the students in their various programmes,” Benedict observed.