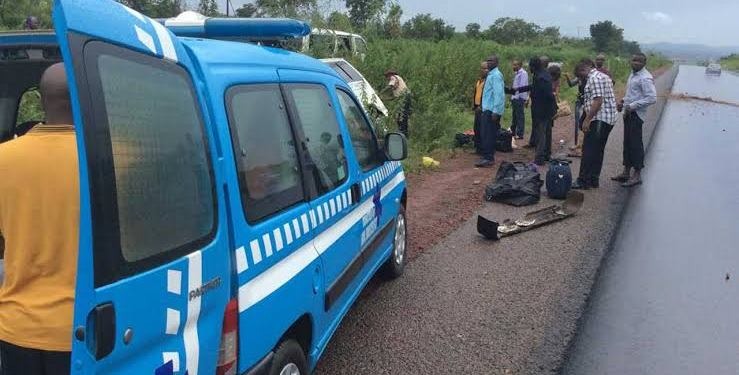 A ghastly road accident along the Lagos-Ibadan highways has reportedly claimed the lives of one pregnant woman and two others on Thursday.

Confirming the sad incident to newsmen on Thursday; the Spokesperson for Traffic Compliance and Enforcement Corps, TRACE, Babatunde Akinbiyi, stated that the accident occurred around 4:30a.m on Thursday.

He added that it also involved a DAF truck with registration number XY 895 GGE and an Iveco truck marked JBD 16 XY conveying granite.

According to the TRACE spokesperson, the driver of the Mazda bus lost control due to overspeed and rammed into an unknown truck from the rear which led to multiple hits by other vehicles.

“Among the three casualties who died in the unfortunate crash are two men who are occupants of the Mazda bus loaded with ‘garri’, while the pregnant woman was in the Mazda bus carrying tomatoes,’’ he said.

He disclosed that the deceased were evacuated by officials of the Federal Road Safety Corps, FRSC, to Idera Hospital’s private morgue in Sagamu.

All of the vehicles involved in the accident were hauled to the Sagamu Police Divisional Command, he said.

While expressing his condolences to the families of the deceased, Mr Akinbiyi cautioned motorists against over-speeding saying “Speeds Kills.”

Watch As Baba Ijesha Prostrates For His Lawyer After Being Granted Bail (PHOTOS, Video)