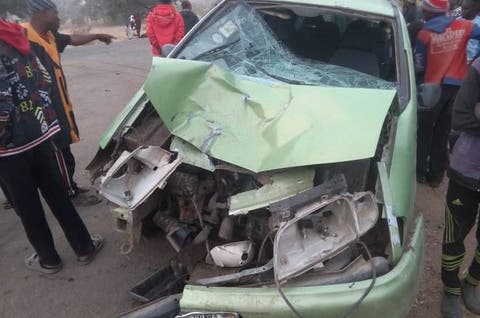 No fewer than eleven persons lost their lives in a ghastly motor accident that occurred along Ife-Gbongan-Ibadan road of Osun State at about midnight.

The accident which happened at Gbongan junction, Opposite Ayedaade local government secretariat, 5km from Sasa Bridge of the town left twenty two passengers sustain severe injuries when a white Mazda E2000 commercial vehicle with registration number KJA392YA and a black Toyota Hiace Commercial bus with registration number had head on collision due to lost of control as a result of over speeding.

Speaking on the incident, the Public Relations Officer of the Federal Road Safety Corps, Mrs. Agnes Ogungbemi, disclosed further that, Ife rescue team of the Federal road Safety Corps had take 6 corpses to Obafemi Awolowo University Teaching Hoapital, Ile- Ife morgue, 4 corpses were taken to OAUTH, Ile Ife morgue by the command night rescue team while the remaining one corpse was taken by the insisted relatives who are from Hausa community in Lagos. The items recovered were taken to FRSC base.

She also hinted that, it was a combine efforts of the FRSC, policemen, ‘O’ Ambulance and Central Hospital, Osogbo that God used to rescue the passengers who were still alive.

The FRSC spokesperson, however, gave items recovered from the scene of the accident as 7 phones, some luggage and some amount of money.