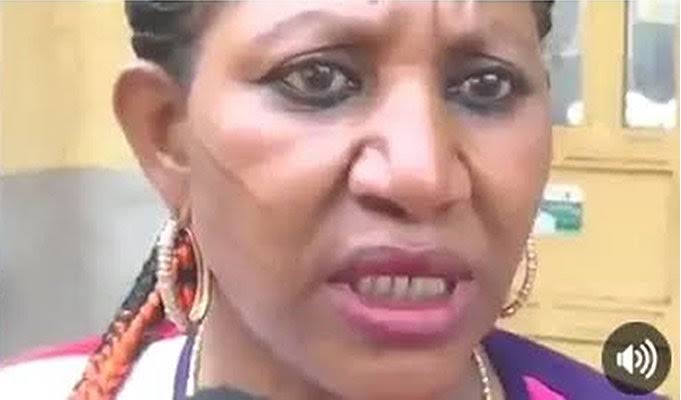 Vivian Umeh, an Igbo-speaking lady with Yoruba facial marks, tells OLUFEMI OLANIYI about her search for her biological father

What is your name?

My name is Vivian Umeh.

I don’t know the exact date I was born but my mates that I grew up with are within the age range of 37 and 39.

Did you go to school?

I completed secondary school but could not go further because my people did not want me to go further than that. They knew that if I went to the higher institution, I would be exposed and would start asking them questions about myself and other things. They are hiding many things from me.

Who are the people you are referring to?

People from my mummy’s family. They are in Awgu town in Enugu State.

Where are your biological parents?

I don’t know who my father is yet. My mother is dead.

Tell me a brief history of yourself?

When I was a child, I was strictly warned against looking at my face in the mirror. They told me so many scary things about mirrors. I saw other children of my age looking at themselves in the mirror but I was forbidden from doing that. They instilled in me a fear of mirrors; I was told I would die if I looked at myself in the mirror.

When I was around seven years old, there was a day I was the only one at home and I decided to take a mirror and look into it. I went inside the house, picked a mirror and looked at my face. I was shocked at what I saw. I saw big marks on my face. Immediately I saw that, as young as I was then, it dawned on me that the tribal marks were the reasons they warned me not to look into the mirror.

I looked at all the children in the community, there was none of them who had such marks on their faces. I started feeling odd but I did not tell anyone that I had looked into a mirror.

One day, when I was around 10 or 12 years old, I went to the market with my aunty, my mummy’s elder sister, and on our way home, one man called me Nwa Balogun. That means ‘Balogun’s child.’ I turned and looked at that man but my aunty started quarreling with the man.

But before that man called me Nwa Balogun, I remember that they used to hide me inside the room anytime one particular man came to our place. They would just rush and hide me and made sure the man did not see me.

Who was the man?

I don’t know but any time that man came, they would just make sure he did not see me. I did not know what was going on but I knew they were preventing the man from seeing me. But at a point, I discovered that the man stopped coming. So, the day that man called me Nwa Balogun and my aunty quarrelled with him, I suspected that something was fishy.

Where was your biological mother at the time?

My mother was already dead at the time and that was why I had such an experience. When I became marriageable, men were coming to seek may hand in marriage. But they would want to know my tribe. I speak Igbo fluently, I don’t speak Yoruba though I have Yoruba tribal marks. So, those coming wanted to know whether I am Igbo or Yoruba. But as I was unable to give any satisfactory answer, they would just go and never come back.

When I come close to Yoruba people, they would call me Iya Ibadan, while Igbo people call me ‘Ofe n Manu’ (someone who likes soup with a lot of palm oil).

Where do you live now?

I am based in Ijebu Ode, Ogun State, now. I am working as a cook at Our Lady of Apostle with some reverend sisters. But as men were coming to seek my hand in marriage and leaving me without any of the relationships leading to marriage, I became worried. So, I went to one woman and told her about my worries. The woman said she would take me to her church. Before then, I had visited many places for spiritual help; I wanted to know why it was difficult for me to get married. I wasted all the money I saved in search of a solution to the problem. At a point, I wanted to kill myself because everywhere I went, they told me to go and search for my biological father. They said I should forget about amounting to anything in life if I didn’t see him. They said anything I laid my hands upon would not prosper except I found my father. They told me that my biological father placed a curse on me that no Igbo man would collect the bride price of his daughter. I was told he said I would come back home because they took me away from him by force. Native doctors revealed this to me and I was told the same thing in churches.

But did native doctors and seers tell you that your biological father was still alive?

Yes, they told me he was still alive.

Did they tell you where you could find him?

The prophetess told me to go to Ibadan. She said I would see my biological father. And as God would have it, when I travelled to Ibadan in December 2020, I met Iba Oluyole, Alhaji Nureni Akanbi, and he adopted me as his daughter after I narrated my story to him.

But some people have been coming to see if I am their daughter. There is a particular man that has the exact type of my facial marks. The story he told me is the same story I was told by my mummy’s relatives (about my father).

What story is that?

I was told that when my father proposed to my mother, to marry her, my uncle said my father could not marry my mother because he was a Yoruba man and a Muslim. But my mother loved my father and because she did not want to go back to her former husband, she decided to get pregnant for my father and that was how I was born.

I was told that my father was transferred out of Ibadan after I was given birth to. He left my mother with his family in Ibadan but my mother went to Ijebu Ode where her brother had relocated to. My father was said to have traced my mother to Ijebu Ode when he came back. He took me away to Ibadan and gave me facial marks and then brought me back to my mother. My mother was very angry when she saw the marks. When I grew older, my father was said to have come back to take me from my mother but the family was always hiding me. My father wanted to take me by force and when my mother’s family saw that, they took me to Enugu State. But my mother remained in Ijebu Ode. I grew up in Enugu and that is why I cannot speak Yoruba.

So, you have now reunited with your biological father?

Yes, to me, that man is my biological father; we just want to do a DNA test to be doubly sure. He told me how he gave me the marks, he gave me the description of my mother’s sister and the woman was dark and fat like he said. But unfortunately she is dead now.

He said when he travelled to my place to pay my mummy’s bride price, my uncle and another woman, whom he described, refused.

When are you going for the DNA test?

I don’t know. But any time he is ready, I am ready too. Iba Oluyole has already adopted me, so my coming to Ibadan has been fruitful. I thank Iba Oluyole so much.

What is the name of that man you think is your biological father?

His name is Balogun.

Is he a retired soldier?

Yes, he is. So he must be the one. But the DNA test is just to confirm what is known. The prophetess, who instructed me to come to Ibadan, has even confirmed to me that the man is my biological father. She told me after she prayed for me. The man is not even in Ibadan, he is on the Lagos Island but he is from Ibadan.