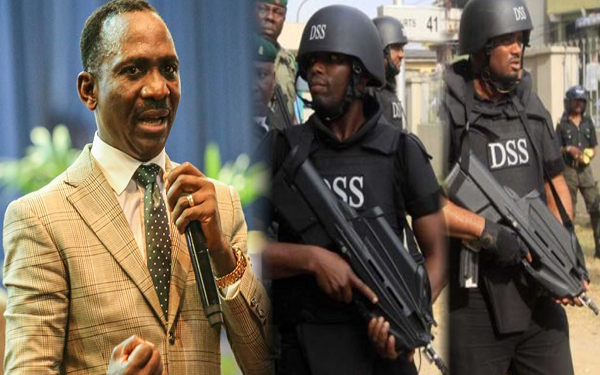 No fewer than 10 youths spotting #BuhariMustGo# shirts were arrested on Sunday at the Dunamis International Gospel Centre, Abuja.

They were allegedly handed over to the Department of State Service (DSS) by Senior Pastor of the church, Dr Paul Enenche.

The Nation gathered the youths, believed to be activists, were apprehended by the church’s security agents.

Eyewitnesses confided they were taken away in a DSS Hilux van escorted by two power bikes.

Sowore claimed the 10 youths, believed to be first time worshippers, were invited for prayer and proceeded to the altar with the #BuhariMustGo shirts.

They were subsequently apprehended by the church security men.

Sowore alleged: “About 10 activists decided to attend Dunamis church in their #BuhariMustGo T-shirts. The church asked all first-timers to come out for prayers,” he said.

“The patriotic citizens obeyed the clarion call from the altar with their fully displayed BuhariMustGo shirt. They were immediately apprehended by the church security on their way out of the church and subsequently handed to the DSS.”

The identities of those arrested were not immediately disclosed.

Many social media users stormed the comment section of the Enenche’s live sermon on Facebook, demanding release of the youths.

Efforts by The Nation to get official reactions of the church failed.

But in what appeared as reaction to the church’s contact shared for people to protest the arrest, the church management accused callers of fraudulent activities.

“Please, ignore anyone posting a number with which to contact the Senior Pastor. They are fraudulent thieves whose judgment will not elude them,” a comment by Pastor Enenche on Facebook reads.