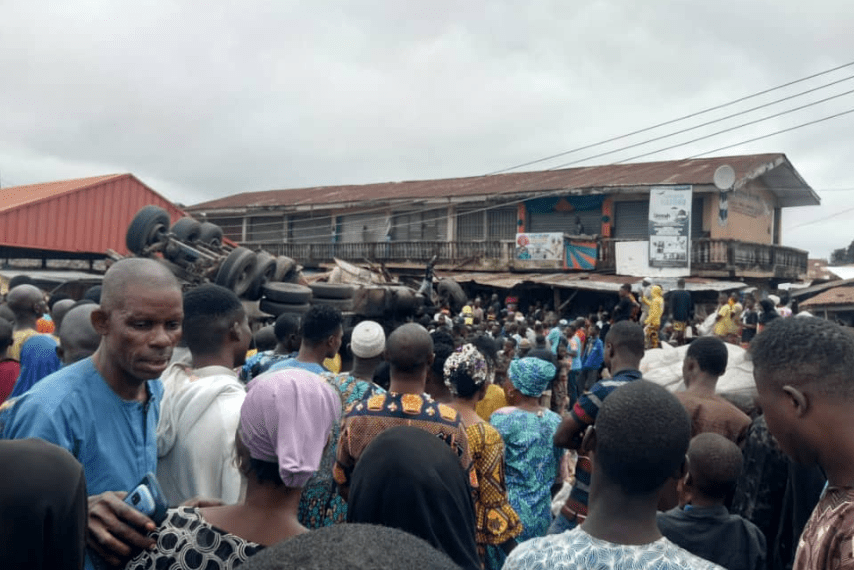 Oyo State Police Command has confirmed the death of five people in an accident that occurred in Ibadan, the state capital.

Today Splash gathered that some persons were reportedly killed during an accident at Bode market in Ibadan.

The market is located along the Challenge/ Oja Oba/ Beere Road.

Several other people also sustained various degrees of injuries during the accident.

The accident which involved a tanker loaded with gas and a commercial tricycle occurred Sunday morning,

Sources said the accident was due to a brake failure.

Unconfirmed reports said about ten people lost their lives but the state police command claims only five people died during the accident.

Deputy Public Relations Officer of the State Police Command, Omotayo Oduniyi, when contacted confirmed the death of only five people during the accident.

Oduniyi said the bodies of those who lost their lives have been deposited at the morgue.

He added that the number of those who sustained various degrees of injuries has not been ascertained.

“It is a case of fatal motor accident, involving a gas carrying tanker and a tricycle, so far, 5 persons have been recorded dead and deposited at the morgue, the number of injured persons is yet to be confirmed, the police in a concerted effort with the Fire Service have successfully managed the situation to ensure there’s no fire outbreak.

Oduniyi added that efforts to evacuate the accidental vehicles are currently ongoing.

“Effort to evacuate the accidented vehicles is currently ongoing. Investigation to ascertain the identities of the deceased is currently at top gear.

“However, the situation is under control and further development will be communicated soonest please.”