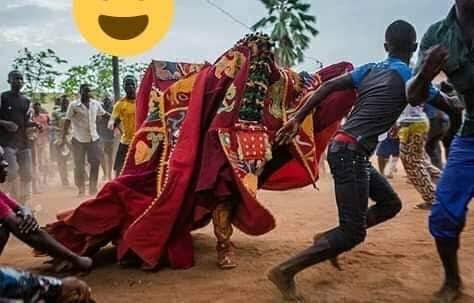 There had been confusion in some parts of Ibadan, Oyo State Capital as festival of biggest city’s masquerade, Oloolu was celebrated.

The ancient city has been witnessing unrest since Monday the masquerade first came out as its followers who are mostly hoodlums took advantage of the festivity to unleash mayhem on residents by robbing them of their belongings.

This has however been the usual practice and the family house in Ode-Aje area of Ibadan who is the custodian of the masquerade had been forewarned by the state government but this fell on their deaf hears.

A man who is the Mojaji of Ladele Compound in Ode-Aje area recounted ordeal. LiveTimesNG gathered that the man who is a headmaster of a primary school in Oloba area after Oremeji said the hoodlums on Thursday invaded his school, robbed teachers and others of their phones and other belongings. He added that the hoodlums also machete him and others while they also raped some older pupils in the school.

This however forced many schools in the area and its environs to closed immediately and send the students and pupils home.

A lady who spoke to our correspondent on condition of anonymity said she was on Okada in front Agugu police station when she sighted them a far robbing people of their phones and other belongings. She described how her Okada rider swift turned back while the hoodlums chased them.

LiveTimesNG checks revealed that no fewer than three people killed in Ajegede area on Tuesday while one killed in Gate on Wednesday.

Our correspondent also gathered that three weeks ago, outing by another big masquerade like Oloolu whose name can’t be identified as at when filing this report also turned violent when the masquerade killed a small boy in Oja Igbo in Ibadan and this enraged some concerned people in the area who attacked the family house, the custodian of the masquerade and this left many killed.