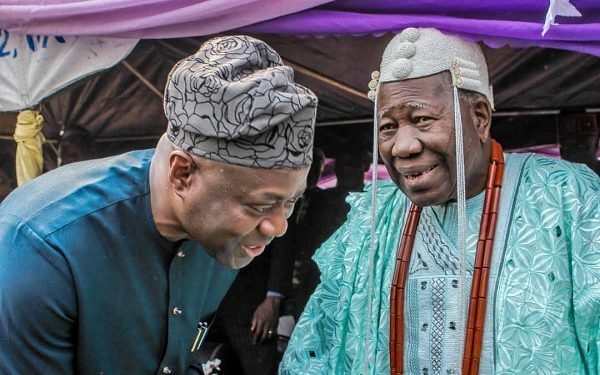 The Olubadan of Ibadanland Oba Saliu Adetunji has distanced himself from the decision of the Ibadan Traditional Council faulting Oyo Governor Seyi Makinde’s over handling of security.

The monarch made his position known in a statement by his Personal Assistant/Director of Media and Publicity Adeola Oloko felicitating Muslims in this year Sallah on Monday.

Members of the Ibadan Traditional Council had in a meeting at the Olubadan Palace, Oja’ba, accused Makinde of running a one-man management of the security architecture in the State.

It said the approach was responsible for worsening insecurity in the State.

Members of the Council said the Governor excluded traditional rulers, including family heads (Mogajis) from the security system despite being the closest to the people.

The meeting was led by the Otun Olubadan High Chief Lekan Balogun.

But Oba Adetunji said the decision was not that of the Olubadan-In-Council which held its meeting on Thursday.

He added that Governor Makinde was not part of the agenda of the last meeting.

“The most recent meeting of Olubadan-in-Council was held last Thursday to set agenda for the newly inaugurated executive of the Central Council of Ibadan Indigenes (CCII) under the leadership of new President-General, Prince Yemisi Adeaga,” the statement reads in part.

The monarch further explained the meeting, which he presided over at his Popoyemoja, Ibadan palace, was not attended by the Otun Olubadan, High Chief Lekan Balogun, who spoke with the media faulting the Governor on security.

“All those who attended the meeting under reference would agree that while so many issues were discussed, Seyi Makinde was never part of our agenda,” he said.

Oba Adetunji contented apart from the meeting of the Olubadan-in-Council, he did not attend any other meeting under whatever name it is called.

He said the opinion expressed by High Chief Lekan Balogun was entirely his personal opinion, which he is entitled to and not that of the Olubadan or his council.

He contended further if anyone is in doubt, he could reach out for the minutes of the meeting under reference.

The Olubadan said security meetings are held at different traditional councils, adding that they brief appropriate law enforcement agencies about their decisions.

The monarch congratulated the Muslim Ummah on this year’s Eid-el Kabir celebration, urging them to emulate the examples of Prophet Muhammed in obedience to the will of God and service to humanity.