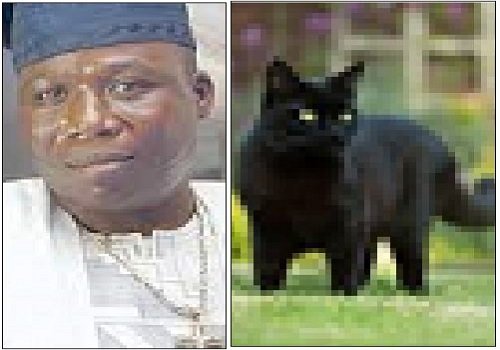 It may not surprise historians that when the story of Sunday Igboho is told it may not be about humans. Not about a rustic upstart rewriting his hubris to muster a tribal pride. Not about herdsmen as barbarians, or the torching of palaces, or the slaughter of red-blooded hunters and the defiling of nubiles.

It may be a legacy of a cat. Hence, I wonder when the case of Igboho against the federal government in the international court kicks into earnest, will the cat be summoned in evidence? Many things have been said about the night cat, but nothing about its identity. Was it a fat cat, nourished in the rats and droppings of the home? Was it a lean cat straying into a human staccato of action just as a cartoon now trending has suggested? Was it a bold male, a sly kitten? Was it on the run, in a half-daze? Did it meow or growl, or squint? Was it a black cat, now invisible in the night, now visible, its eyes bright and defiant, stabbing the night? We are left to fill in the void, a vast tapestry of colours and sounds in that night of augury and blood.

The men and women of the DSS and the Nigerian army who rallied into the compound without warrants, may have shot few persons dead, slurped away Igboho’s wife and the guards and others in a triumph of a cat fighting a rat, but it was the cat that won the night. The fuzzy creature became in their eyes not an animal but a transformation act.

It became an escape artist, like the goat Djali who helped the stunning damsel Esmerelda outwit her foes in Victor Hugo’s classic, The Hunchback of Notre Dame. So, they thought Igboho was the cat, and what did they think they could do to it or him? Could they force it to rehumanise? To turn into human again? Could they have handled it or would they have fled, gun and all, in a commotion of cowardice? The little creature transformed from a low, small fur into the mammalian hulk, eye turning human, fore legs turning to hands, hind legs elongating into a full stretch of a homo sapien, feet unfurling and his voice shouting in strange bass, “Yoruba nation.”

Even as they surveyed the cat, did they tremble? Did it occur to them at that moment that the very spectacle of the cat exposed the hollowness of the whole project that night? That it was all fiction? That they were looking for a man who was not there, and they were fighting a cause that was not there? That the man had riled up a crowd did not mean he rallied a nation? It meant the state had lost its onions. It was pursuing a fiction just as it was pursuing the chimera of Twitter. Twitter that should bring job to us, excite a community, leverage a cause, to help fight the ignorance. They were now fighting in the vanguard of ignorance.

The cat in question has no name, it may have been a neighbourhood cat, a hungry cat, straying with the same impunity with the soldiers. Cat without warrant. Soldiers without warrant. We might say it had the guarantee of a cultural warrant. Soldiers had no legal warrant. The cat, however, came like a thief in the night, an intruder’s humility. The soldiers came like the beast in the night, barrelling in with a rat-tat-tat of gunfire. The real beast, paradoxically, was innocent. It wanted food. They wanted humans as fodder, a cannibal feast. The humans were beasts. Did I hear Fela croon, “beast of no nation…” Some said the cat was Ighoho’s pet, that helped to rid the home of rats. Reminds me of my maternal grandfather in the village of Orogun. Once in a while he would ask us to open the doors and let the cats in. The gleeful predators padded stealthily into the rooms and a few minutes later, they were growling out with mouthfuls.

In the west, if a raid of this nature happened, the police would look for a treat for the cat. They would even play with the creature.

That our soldiers decided to arrest the cat reflects how as a culture we have made ourselves lower than the animals. The cat cowed them, it probably meowed them into fear. They stooped. The cat conquered. In metaphor, they were like playwright Tennessee Williams’ cat on a hot tin roof. They were intimidated by the animal because the whole incursion into Igboho’s compound was lower than humans. It was a bestial act. Rather than coddle the cat, they saw themselves as lower than it. God made us a little lower than angels. The army acted a little lower than a cat. They did not think it harmful in physical terms but spiritual. They had guns. They had bombs. But they had fear. That is the power of superstition. Rather than shoot, they shrank.

It is not today that tales of animal superstition have pervaded military escapades and campaigns in Nigeria. I recall a visit to Black Scorpion, Brigadier Adekunle as a reporter in the late 1980’s. The small man, then old but the sparkle of his martial past undimmed, spoke without glee about the war. I asked him about stories of his disappearing acts. He laughed it off. He said there was no truth to it. The man was hardly in the battle front. But some myths said he turned to animals and disappeared. That soldiers in battle believe this only tells us how idle some of the minds of our soldiers are.

We need not only liberation from ourselves. We need it from animals. When President Clinton was in the White House, I was one of a few guest journalists who paid a visit to the man. He was in Colorado for the G-8 then, but we saw his cat, a buxom affair named Socks. The caretaker asked us to touch the hairy creature, and I did with delight. It was the first time I had touched a cat. I would in the course of my American journey not only play with them, but feed them. I helped a colleague whose cat died perform a burial ceremony over her beloved cat, with a swoop of Shakespearean oratory while she shed tears. It was a black cat. When I was in the newsroom a month later in Denver, reporters made me feel like a superstar because I touched the nation’s first critter.

If we remember the feline story, we can say they feared the Igboho cat the way the Europeans slaughtered medieval cats instead of rats as culprits for the plague that overwhelmed the continent, a scenario painted in Albert Camus’ novel The Plague.

The raid at Igboho’s and the cat episode was a moment in Bubonic plague in Nigeria and the state, a plague of fear, a fear of free expression, a fear of democracy.

It’s in the Southeast

Two weeks ago, this essayist noted that the Jonathan administration rose on the enthusiastic wave of Southeast joy, but the Otuoke man did little other than pad the elite. I noted that Buhari, for all his sectional zest, has done more for the region than anyone for the region since Gowon. A trove of protests online could have shocked me if I had not prophesied that even if Fashola paved the roads with gold some would not see it. Prejudice makes a good thing seem bad. Just as I wrote this the FEC approved MTN to assist in the Enugu-Onitsha Expressway that is a great work in progress. Or shall I say also of the Owerri-Enugu road? The Second Niger Bridge was Jonathan’s rhetorical feast without a feat on the ground or water. Even the blind will rejoice at the vista of what is going on there. When Jonathan left office, he had infrastructure vote of N18 billion. With Fashola on the seat, the budget is over N260 billion. By any fraction, this government is spending more for the southeast than Jonathan budgeted for the whole nation when the dollar was over 100 dollars per barrel. Babatunde Fashola, trojan of works, is leaving much for history to chew.

But Buhari is his worst enemy with Igbos. He has hurt them too much to please them. But the work is on in the region. They only have to look. For instance, three out of the six-lane driveway of Onitsha-Umunya-Awkuzu-Abba/Ukpo-Amawbia-Awka section of the Onitsha-Enugu Expressway has now reduced drive-time from 1:15 to 25 minutes. So, there!