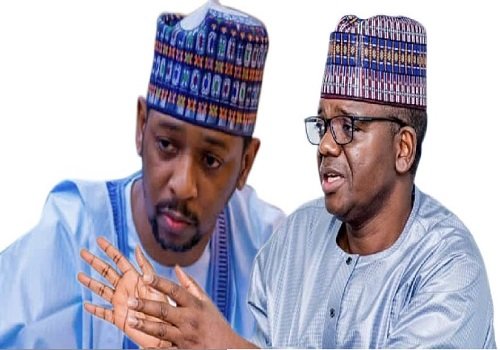 ‘Dare Odufowokan, Assitant Editor, writes on the festering rift between Governor Bello Matawalle of Zamfara State and his deputy, Muhammad Gusau, and submits that the end may not be in sight.

PENULTIMATE week, when the deputy governor of Zamfara state, Muhammad Gusau, while speaking on the decision of his boss, Governor Bello Matawalle, to dump the Peoples Democratic Party (PDP) for the All Progressives Congress (APC), said he is willing and ready to work with the governor irrespective of their party differences, not a few people disbelieved him.

“I will continue to remain loyal to the governor. The last assignment he gave me was to represent him in Uyo for the PDP Governors Forum and from there we moved to Calabar and returned together with the Sokoto State Governor,” he said at a press conference same day Matawale joined the APC.

While speaking at the press briefing, the deputy governor also said he will never join the governor and others in the APC whatever happens. “I will continue to stand by our party and the people who stood by us in our time of need. I accept the consequences of my decision in good faith,” he said.

But those who should know say the relationship of the embattled deputy governor and his boss has long gone sour. The Nation gathered that since the governor started tinkering with the idea of dumping the APC, his deputy had not hidden his disdain for the idea. Consequently, the governor stopped since Gusau as an ally.

“The situation in Zamfara today didn’t start with the defection of the governor. It started much long ago. When the governor started considering defection as a political option, he told majority of his political allies and associate, including the deputy governor. But it appeared Gusau, unlike many of the governor’s men, openly expressed his objection to the idea.

“It is also on record that the governor made some effort to convince his deputy to buy into the plan, especially when it became obvious that defection is the way to go for political survival. But Gusau insisted he will not have anything to do with the APC. At that point, he was kept in the dark about the defection plot.

“It was such that by the time the governor finally defected, Gusau can no longer be counted among the governor’s men despite being the number two man in the state. Most of what he knows about the defection, he read on the pages of newspapers. Expectedly, he refused to move with the governor and that set the stage for a new round of hostilities,” our source said.

The PDP considers the governor’s defection as a major loss for the party in Zamfara. So, the party, sources claim, is ready to test all the provisions of the constitution in pursuit of a redress. This, The Nation learnt, is the source of the tension in the state.

“Our party will not accept the defection of the governor in good faith. Yes, you may argue that Zamfara won’t be the first place a governor will defect, but I tell you the case of Zamfara is peculiar, given the circumstances Matawalle became governor. He became governor on account of the party’s performance in the election, not because he won.

“So, he cannot take our mandate and hand it over to the APC which was adjudged disqualified to run in the election that produced him. We strongly belief the court will see reasons and restore our mandate. We are ready to go the whole hog and good enough, the good people of Zamfara are with PDP in this struggle,” a state official of the PDP told The Nation on Thursday.

Recall that the state came under PDP control after the Supreme Court nullified all the votes cast for APC in the 2019 elections. The apex court had ordered the Independent National Electoral Commission (INEC) to declare the party with the second highest vote in the elections as the winner. The landmark judgment was delivered a few days to the May 29 inauguration day.

The Nation also gathered that while the plan for the defection lasted and the governor gradually fell out with prominent PDP chieftains within and outside the state, the deputy governor became some sort of beautiful bride being courted by all and sundry within the party. This, sources said, further strained the relationship between the two politicians.

“The deputy governor has been enjoying the attention and friendship of PDP leaders within and outside the state since tales about Matawalle’s possible defection started filtering out. The governor’s camp didn’t like it and he was severally accused of disloyalty, an allegation he kept denying.

“While they kept him in the dark of their defection plot, they were accusing him of hobnobbing with leaders of his party within and outside the state. Few days before the defection, the governor’s men were bitterly complaining about the governor’s closeness with Governor Aminu Tambuwal of Sokoto state at PDP governors’ event.

“Gusau’s offence is that he is not hiding his resolve to stay put in the PDP while also remaining as the deputy governor. His popularity across the state and his family background are also some sort of threat to the governor and his new party in the state. These and many more are the reasons they want him out at all cost if he insists on not joining their new party,” our source added.

In a move that further heightened the tension in the state, the PDP commenced legal action to unseat Matawalle and Gusau as governor and deputy governor respectively. The party, in an exparte motion filed before a Federal High Court in Abuja, wants the duo sacked over alleged unlawful defection from the party.

The suit, marked: FHC/ABJ/CS/489/ 2021 filed in the names of two PDP members from Zamfara State, Alhaji Sani Kaura Ahmed and Abubakar Muhammed is contending that, in view of an earlier judgment of the Supreme Court, to the effect that the APC had no candidates in the 2019 governorship election in Zamfara State, having not conducted valid primaries, it would be unlawful for Matawalle and Gusau to retain their offices while defecting from the PDP to the APC, and thereby transferring PDP’s victory to the APC.

The plaintiffs want the court to among other reliefs declare that Matawalle and Gusua must resign from their offices upon their defection to allow INEC to conduct the fresh elections, within three months, for the PDP to replace them.

The matter assumed a new dimension that further confirms fears of a looming power struggle between Matawalle and Gusau when the PDP last week amended its earlier position by asking the Federal High Court, Abuja to remove the name of the deputy governor from its suit seeking his removal and that of the Governor from office over defection from the PDP to APC.

When the matter came up on Friday, PDP lead counsel, Chief Kanu Agabi (SAN), applied for the withdrawal of the deputy governor’s name on the ground that there was no evidence of defection from him. The request for the removal of Gusau’s name from the suit was not opposed by other lawyers in the matter, and the judge subsequently ordered the removal of the deputy governor’s name from the suit.

Similarly, in a move in total contrast to his earlier pledge of loyalty to the governor, the deputy governor allegedly made moves that indicate his readiness to unseat his boss following the latter’s move into the APC. Like the PDP, Gusau predicated his decision to unseat Matawalle on the 2019 Supreme Court verdict which voided the victories of all APC candidates at the elections.

He attended and addressed a massive rally held in his honour by PDP members in Gusau, the state capital days after the governor’s defection. Speaking at the rally, he assured his supporters that the PDP will retrieve its mandate from Matawalle and the APC. This was interpreted as a declaration of hostility by the governor’s supporters.

“Though the deputy governor promised to remain loyal to the governor in spite of the defection saga his public utterances of late are not in tandem with that pledge. At the rally they held in his support, he told members of the PDP that the governor will lose his mandate to the PDP. Is that loyalty? It is obvious that the two of them can no longer work together,” a source in the governor’s camp said.

Expectedly, the governor wasted no time in firing back at Gusau. Matawalle says he will not tolerate any disrespect or insubordination from his deputy. Commenting on the turn of events when he spoke with DW Hausa Service on Saturday, Matawalle said he remains the chief security officer of the state and should have been informed of the recent rally by his deputy.

“As governor of the state, I promised to work together with the deputy governor irrespective of our political affiliations. But I won’t tolerate a disrespectful attitude from him. I won’t join issue with him but if he dares me, I will give him the treatment he deserves. The deputy governor should have notified me of whatever he planned to do. Being of different political parties does not mean I am no longer his boss. Since the defection, he has stopped associating with me,” the governor said.

A further political twist unfolded as the House of Assembly attempted to commence the impeachment of the deputy governor under the guise of questioning him for holding a political rally after scores of people were killed in an attack by armed bandits in the state and ‘disrespecting’ the state police commissioner in a WhatsApp chat.

The House asked Gusau to appear before it to explain why he held the rally without considering the security situation and “in disrespect of advice by the security authorities in the state”.

However, respite came the way of the embattled deputy governor when Justice Obiora Egwatu of the Federal High Court in Abuja, stopped the impeachment move against him during the week. The judge stopped the Zamfara State House of Assembly members from taking any further step in the impeachment move against Gusau. Justice Egwatu issued the order last Monday in his ruling in an ex-parte application filed by the PDP.

The judge also restrained the Chief Judge of Zamfara State from constituting any panel for the purpose of investigating Gusau pending the determination of a motion on notice filed by the PDP. Other defendants in the matter are Independent National Electoral Commission (INEC), APC, the Senate President, the Speaker of House of Representatives, Speaker of Zamfara House of Assembly and Governor Bello Matawalle.

BBNaija Season 6: Organizers Announce N1m Cash Price For Viewers From Home (See How You Can Win It)