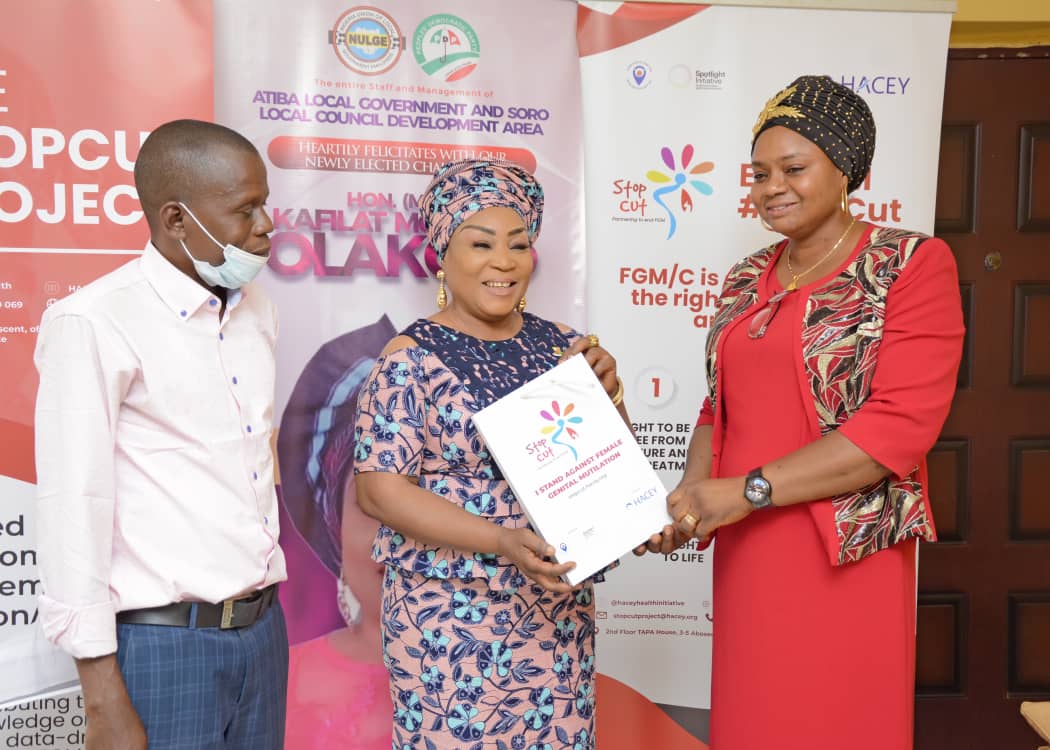 Female Genital Mutilation Is A Global Project And We’re Committed To Join The Fight Against It, OLAKOJO Vows

Earlier today the Executive Chairman of Atiba local government, Hon. (Mrs) Kafilat Olakojo warmly received the team of HACEY Heath Initiative in collaboration with the Oyo Ministry of Health on the campaign trail to put an end to Female Genital Mutilation which has become a global phenomenon, with the hashtag of #EndFGM #StopCut among others.

The team which was ably led by Alhaja Balikis Kemi Olawoyin from Oyo state Primary Health Care board, expressed that Atiba local government is on of the state councils with recent cases of female circumcision, regardless of the global campaign against it.

She further expressed that, they come to realized after their thorough under study of the recent occurrence of female genital mutilation in our locality, that the unjust traditional practices is centered on myths, speculations and misconceptions and this require a community sensitization and mobilization, to tell people about the health and social effect embedded in this practices.

“Female circumcision is a traditional practice, it has no social or health value, so there’s must be a stop to it” she said.

Hon. Kafilat Olakojo while welcoming the team to Atiba local government, appreciated them for availing this great opportunity for the good people of Atiba local government and also promised to make handsome contributions, both financial and human resources to support the fight against female genital mutilation as it plays greater health impact on the life our daughters.

The council boss, in her word, said “We’ll ensure, within our capacity to support this cause, we’re setting up committee from health, environmental and education officers to see to the community mobilization and sensitization against this aged practices”

“Genital circumcision is a global project and has much to do with our health and as an administration, we’ve placed high priority on the healthy life of our people, so, we’ll ensure it’s adequately taken care of” she affirmed.

The HLGA, Esv. Kunle Ogunsola while making vote of thanks appreciated the team for bringing such a beautiful project to the council and promised to work as an individual to ensure that necessary actions are taken to inform people of the menace of this practice in a bid to put a stop to female genital mutilation.

In attendance, were council heads of directorate, the chief of staff to the Chairman among others.

JUST IN: Makinde Approves Installation of Mini-grid Energy Projects In Ogbomoso, Atiba, Others