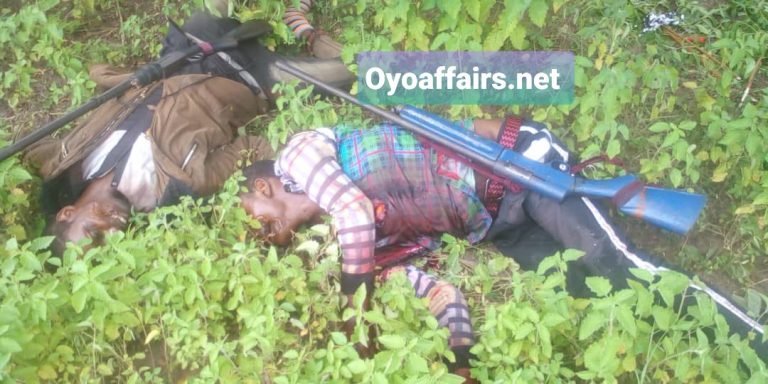 Operatives of Amotekun Corps in Oyo State, on Friday, foiled an operation by some suspected kidnappers attempting to abduct some residents of Iwereile community, in Iwajowa Local Government Area of Oyo State.

Briefing the newsmen on Saturday, the Amotekun Commander in Oyo state, Col Olayinka Olayanju (retd.) said that the operatives got a distress call from one Mr Olanrewaju about suspected kidnappers sighted at Elewuro village at Iwereile area.

The operatives informed their Area Coordinator and the Divisional Police Officer, DPO, at Iwereile and were given the go-ahead to engage local vigilantes in the raid.

He said, “The operatives met the kidnappers at Elewuro and engaged in a gun battle with them.

“They collected six phones, one pump-action and one English gun from them. The kidnappers were 5 in number. During the gunfight, two of them were killed and the three others escaped with bullet wounds.”

“The operatives handed the two dead bodies, the guns and phones recovered from the kidnappers to the DPO who expressed satisfaction at the job done”