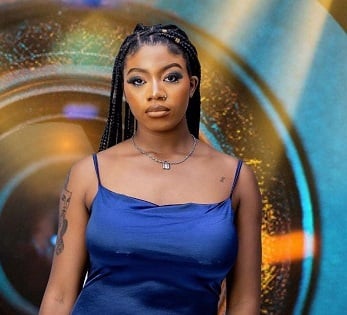 The 21-year-old housemate that has been going commando since her entry in the BBnaija Shine Ya Eye was caught on camera fondling herself.

The short video saw Angel sitting alone but in a discussion – and oblivious of her surroundings – dipped her finger in her private part.

Angel has since been in the news since her appearance on the show.

She was once castigated by viewers for not wearing undies while others body-shamed her.

In her 11 days in the house, Angel has expressed likeness for Sammie but isn’t on good terms with him following her daring decision to play with Pere’s manhood during a Truth and Dare game.