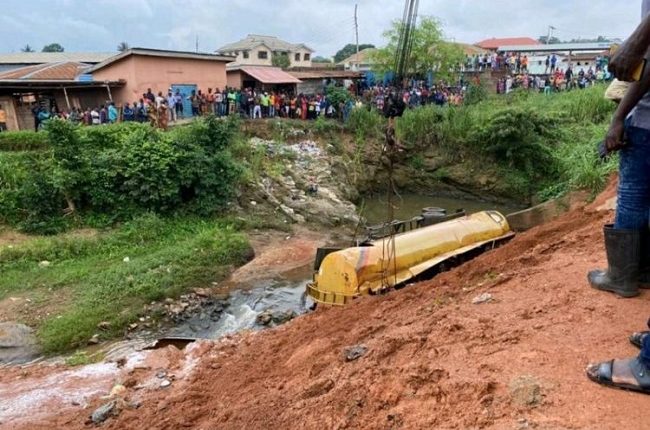 No fewer than five persons were crushed to death by a fully loaded petrol tanker on Monday at Celica area on new Ife-Ibadan road, Egbeda Local Government Area of Oyo State.

It was gathered that the petroleum tanker lost control, rammed into a Micra car and plunged into a nearby ditch with the Micra car.

Chukwurah described the accident as fatal, resulting in the death of five persons, three male and two female adults.

She said that the accident involved two vehicles which included a fully loaded petroleum tanker and a Micra taxi car.

The sector commander said that the tanker had a brake failure, lost control and rammed into the Micra car leading to the death of all passengers in the Micra car.

“The whole people inside the Micra car crashed to death and nobody was rescued alive.

“The deceased has been deposited at the Adeoyo Hospital mortuary,” she said.

Chukwurah further said that men of the Fire Service were also at the scene to prevent fire outbreaks in the area.