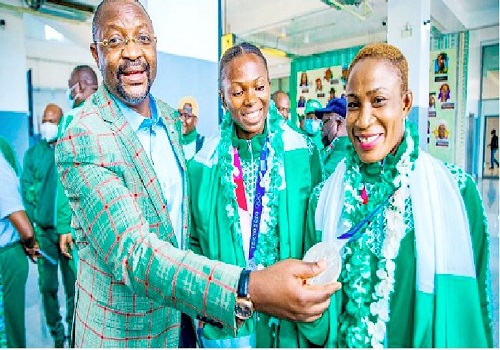 Nigeria Finishes 74th, Africa’s 8th In Tokyo With One Silver And One Bronze

Team Nigeria finished 74th at the end of the 2020 Tokyo Games and eighth best among the 54 African nations at the Games.

With two medals made up of one silver and one bronze, Team Nigeria made the top eight with 55 athletes.

Ese Brume won Nigeria’s first medal at Tokyo after settling for bronze medal in the women’s long jump event, while Blessing Oborududu won the first wrestling medal for Nigeria at the Olympic Games after the 10-time African champion settled for silver medal in the women’s freestyle 68kg.

Incidentally, both Brume and Oborududu were part of Nigerian athletes that benefitted from the International Olympics Committee (IOC) grants for training leading up to their podium finish in Tokyo.

The Games which began on July 23 and ended yesterday with 93 of the 206 participating teams making it to the medals table, including 13 of the 54 from Africa.