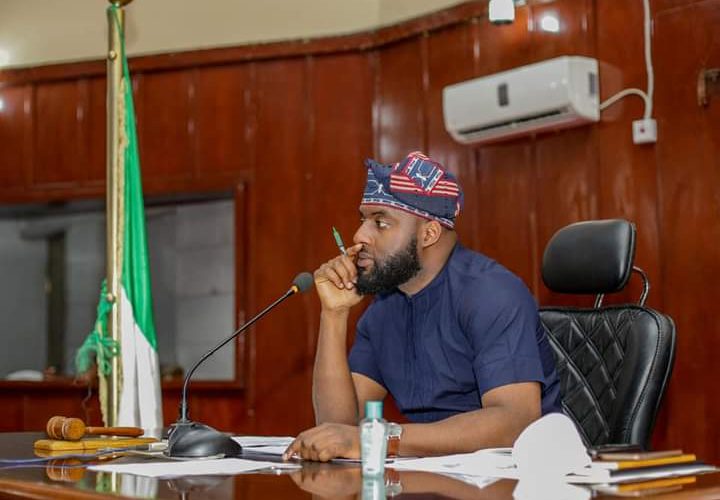 Five aides to the Speaker of Oyo State House of Assembly have been arrested by the men of the Nigeria Police Force for setting part of the Speaker’s lodge ablaze and carting away nothing less than N3.5million.

According to reports, the money stolen by the aides belongs to the Speaker at his lodge, in Agodi Ibadan.

It was gathered that a portion of the lodge was set ablaze by the aides after the money was stolen from the lodge.

A credible source at the police command confirmed that police was able to recover N500,000 from the aides after a week in police net.

According to the source, Adebo Ogundoyin who was abroad when the incident happened rushed down to Nigeria after he learnt that his house was set ablaze.

He said: “We have released them on bail. The Speaker actually wanted police to deal with them but he later considered them for bail when the state Commandant of the NSCDC, Commandant Adaralewa Michael, intervened. Two men of NSCDC, two personal security aides and a cook were arrested and detained.

We were able to recover N500,000 from them. We visited the area where they set ablaze. It was well planned by those people. They were in the cell for more than two weeks before the Speaker returned from abroad.”

The 35-year old Speaker is currently on the watch list of the Economic and Financial Crimes Commission (EFCC), over alleged N1.03billion fund used to purchase vehicles for members of the House.

A former prosecutor with the Special Presidential Panel on Recovery of Public Property, Tosin Ojaomo, had in January 2021 petitioned the EFCC over the purchase of about N1.03billion worth of official cars for members of the Oyo State House of Assembly.

The petition had read in part, “My petition stemmed from recent findings that the sum of N1,031,380,000 earmarked by the Oyo State Assembly for the purchase of vehicles for honourable members of the house was diverted by the Speaker and Deputy Speaker with the connivance of a company contracted to handle the purchase and supply of cars to the House members.

“The contract was awarded for the supply of brand new Toyota Camry 2019 models but instead of supplying new cars, he went ahead to supply refurbished vehicles and cleaned up the mileage in order to make them look like new ones.”